January 2017 Real Estate Stats are out, will Chinese New Year resuscitate the market? 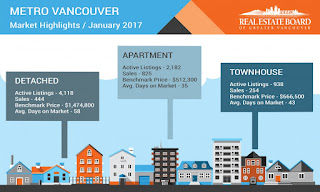 The Real Estate Board of Greater Vancouver (REBGV) announced the January results at the end of last week and you can read their official press release here.

So, officially, home sales crashed 40% last month on a year over year and were down a dramatic 11% from what is normally one of the slowest months of the year.

Normally this is where Real Estate agents rush in and say, "no worries. February is Chinese New Year... which means lots of wealthy foreign buyers."

But here's where it gets sticky. The number houses sold worth upwards of $3 million+ has plunged 79% lower. And there's a current supply of almost four years on hand based on current sales numbers. In houses valued over $5 million there’s a five-year supply. Worse, 91% of all the sales in January were for less than asking.

Whether you blame it on the BC Government's Foreign Buyers Tax or not, the reality is that the number of foreign buyer's looking for Vancouver’s luxury real estate has declined dramatically. According to the most recent numbers from B.C. Ministry of Finance, sales of homes over $3 million declined by a whopping 91% from the July peak. Only 8 luxury properties were bought by foreign buyers in November. Curiously November is the last data point that was published. The MoF seems to have skipped reporting for December which suggests it was even worse than November.

Meanwhile realtor Ross Kay advises that the Average Purchase Price of Vancouver real estate plunged a dramatic 19.2% last month and that over 84% of all homes listed for sale failed to sell.

One of the things that drew many wealthy Foreign Chinese buyers to Vancouver was it worldwide reputation for being a housing casino with almost guaranteed gains the last few years.  Even if they wanted to catch a falling knife by buying right now, you can be sure any offers are going to be cut throat low.

High expectations are riding on the BC Provincial Government's softening stance to the Foreign Buyers Tax.

We will see next month if it's enough to turn things around.

Posted by Whisperer at 3:04 PM