Will that be cash or chargex? 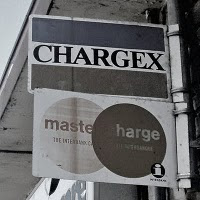 Seems to me it has become ingrained in Canadians to choose the latter.

Maybe that explains why, throughout 2009, we witnessed our housing market rebounding while America's foundered.

Unemployment in Canada has been consistent with that of the United States, but the Canadian economy has seemingly fared better. Perhaps it has something to do with the profound credit numbers Jonathan Tonge posted on his blog this week.

It seems that while Canadian incomes are falling, credit is skyrocketing

According to the Conference Board of Canada, Canada’s income per capita fell in 2008—the first time this has happened since the 1990–91 recession.

Yet our economy is doing better than America's... why?

I wonder if it has to do with the fact Canadians are hell bent on spending money they don't have?

During the period of April 2008-October 2009, government insured and securitized mortgages (NHA securtized loans)increased by a whopping 67%. Total household credit (consumer credit and residential mortgages) grew 14% or by $165 billion.

Then there is this data. According to the latest release by the Bank of Canada, during the period of February 2008 - November 2009: 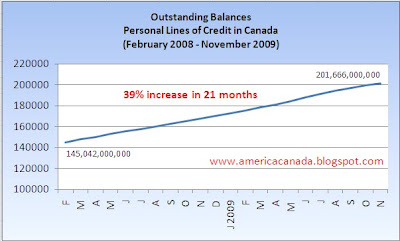 All of this borrowed money has been a massive stimulus on the domestic Canadian economy, but spending on credit like that can't continue forever.

These numbers start to show clearly why the Bank of Canada has forecast that by the middle of 2012, 10% of Canadian households would have a debt-service ratio that is at a severe risk to financial shock.

Americans have taken heed of the 2008 financial crisis and over the past year have increased their average savings rate to approximately 5%.

With each passing day it is becoming increasingly clear we have not avoided our day of reckoning here in Canada at all... we've only postponed it.

And when things start to tumble... look out. It's not going to be just real estate that crashes hard.

Please read disclaimer at bottom of blog.
Posted by Whisperer at 4:27 PM