If Greece Is Bear Stearns, Will the UK Be Lehman? 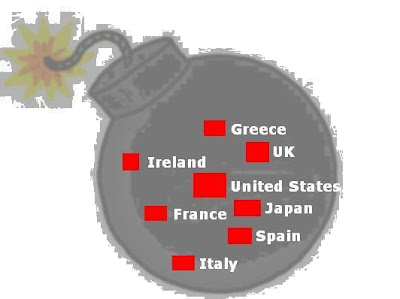 Sunday’s news of a 750 billion euros ($951 billion) stabilization fund and European Central Bank assistance for the European bond market averted a full fledged liquidity crisis, but many remain sceptical that the crisis has past.

Can the governments in Greece and Portugal live up to their end of the bargain and significantly cut government spending in the face of bitter opposition from voters?

Fry, it should be noted, worked for Lehman before its collapse.

There is an insistance that the UK will be alright because it has the ability to sell government bonds internally.

Steven Barrow, the head of G10 Research at Standard Bank, holds that opinion. “I am confident about the prospects for the pound,” Barrow said.

The difference between the UK and Greece, according to Barrow, is that Britain has more room for maneuver. “The UK can devalue and print money, the UK will not default, the UK will not need the IMF,” he said.

Sounds like a recipe for currency collapse to me.

And Anthony Fry is adamant that such analysis is nonsense.

“I can’t believe (the UK) can avoid trouble," he said. "The current coalition talks are like arguing over a birthday cake. Once they decide how much of the cake they get they realize no one bothered to bake the cake.”

Fry makes the exact same point I have been making the past few months; with a lot of money needing to be raised over the coming months and years, UK borrowing costs are going to move sharply higher.

“My big fear is that after (Chancellor of the Exchequer) Alistair Darling refused to support the EU/IMF/ECB bailout of the euro zone bond market, the euro zone may stand by and do nothing when the UK gets into trouble,” Fry said.

Fry remains worried about the problems facing Greece will spread to Spain and Portugal despite Sunday night’s unprecedented support.

“Tuesday was a correction post Monday’s huge short squeeze," Gallagher said. "The big question now is whether institutional investors will return to the European bond market.”

Meanwhile Pimco, the world’s largest mutual fund, made the decision to stay clear of a proposed Greek dollar-denominated bond auction last month and that decision was one of the key moments leading up to Sunday’s rescue package. The coming weeks and months, July in particular, will be crucial. That's when €227 billion redemptions come up in the euro zone and with Spain needing to refinance significantly that month.

“What we are likely to see is a two-tier Europe," Michael Gallagher, director of research at IDEAglobal, tpld CNBC. “A double-dip recession in Southern Europe is increasingly likely. Core Europe will slow, but do OK. The outlook to the South is far worse.”

All these agreements are predicated on the EU governments meeting strict budget targets and stepping up debt consolidation efforts. Which means the Achilles Heel in Sunday's agreement is governments resisting expansionary, deficit financing once its economic fortunes begin to falter.

The United States has been unable to break that cycle, what makes anyone think the PIIGS will be able to?

So, if if Greece is Bear Stearns and the UK is Lehman, who will be AIG?

I'm willing to be it will be California.

As I said last week: first the PIIGS, then the UK and then... the United States.