Inflation in Argentia is at 25% 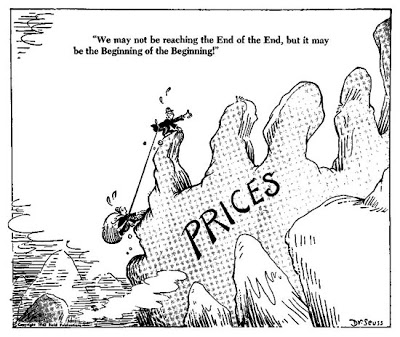 I'm always amazed at the number of people who scoff at the suggestion that inflation is a concern right here, right now.

It is taking hold around the world as we speak.

The latest example comes from Argentia.

Annual price increases in South America’s second-biggest economy are more than 25%, which would make Argentina’s inflation rate the second highest in the world behind Venezuela. Argentina’s statistics agency said prices rose 9.7% in March from a year earlier.

Quickening inflation in South America’s second-biggest economy isn’t a concern only for those trying to buy groceries. Doubts about the government’s data mean investors demand higher yields on Argentine bonds, said Edwin Gutierrez, who manages $5 billion in emerging-market debt at Aberdeen Management Plc in London. The current yields on Argentine debt of about 12% percent are unsustainable, he said.

The extra yield investors demand to buy Argentine bonds over U.S. Treasuries is 696 basis points, or 6.96%, according to JPMorgan Chase & Co.

Compare that to Iraq where the so-called spread for Iraqi bonds is 3.88%. Even the Dominican Republic, whose $46 billion economy is barely one-tenth of Argentina’s, sold $750 million of bonds last month yielding 7.5%. Argentina’s dollar bonds due in 2015, by comparison, yield more than 12.5%.

Surging government spending is behind the price increases, said Daniel Kerner, an analyst at the Eurasia Group in New York. Government outlays before interest payments rose 40.1% in March from a year earlier as revenue increased 39.9% the government said.

Good thing we aren't looking at a problem like that here in North America.