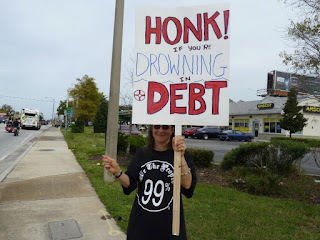 Earlier today we talked about how precarious the debt situation is for a friend's landlord (see Thur Post #1 below).
Now the Vancouver Sun expands on how tedious the debt situation is for Canadians in general.
According to a report released today by the Canadian Mortgage and Housing Corporation, the record level of household debt in this country is a "serious issue."
And what prompted this exclamation?
As of March 2011, Canadians owed more than a trillion dollars on their mortgages.
That's Trillion with a "T".
The CMHC reported that housing-related spending of about $330 billion a year in 2010 has risen by 67% since 2001 and now comprises 20.3% of Canada's gross domestic product in 2010.
These statistics underline the importance of that debt load, and what might happen to the economy if for any reason Canadians crack under its burden.
CMHC figures show that mortgages made up about 68% of total household debt in 2010. Consumer credit, which makes up the other 32%, has been growing faster than mortgage debt over the past two decades.
"Concerns expressed about household indebtedness have been largely driven by the total household debt-to-disposable income ratio," the report says.
"The major risk in the mortgage market is impairment in a household's ability to pay, often due to job loss. Recession or other adverse economic scenarios, such as rising interest rates, could certainly pose a challenge for some Canadian households."
Subprime was the trigger in the United States. Our's may well be debt piggies who can no longer keep their heads above water.
==================

Please read disclaimer at bottom of blog.
Posted by Whisperer at 3:50 PM