The Evolution of Rationalization 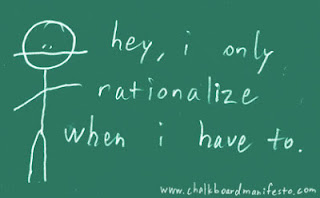 We seem to have entered an interesting phase in the media coverage of our housing collapse.

Instead of denying there is even a bubble to burst in the first place, now the media is filled with economists and 'experts' who predict that prices will fall but by a moderate level that does not resemble the U.S. crash.

The latest to join the chorus (after Muir and Somerville yesterday) is CIBC deputy-chief economist Benjamin Tal.

Tal, however, takes it beyond accepting there will be some price declines and minimizing them. For Tal it's about ensuring slipping prices don't trigger a collapse in buyer/seller confidence.

"There is nothing to fear but fear itself... Panic is the worst thing that could happen because when that mentality sets in and people become irrational, it’s hard to forecast how low prices will go."

Tal, Muir and Somerville have one central worry: that Canadians are starting to talk themselves into a housing crash by creating a scenario in which every new statistic is interpreted in the most negative way with an eye on trying to constantly compare the Canadian housing market with what Americans experienced just before their housing prices plummeted by as much as 50% in some markets.

Which is why each and everyone of them keeps insisting/re-assuring that there will be no U.S. style crash in Canada.

"When you see headlines screaming that Canadian household debt has reached a record level, an eerily similar spot to where Americans were before the market crashed there, it adds to concern. But the similarity ends with the headline-grabbing number. The quality of the debt is much different here."

Tal maintains the people who have taken on more debt have a much higher credit score than the Americans who did the same prior to their market crash.

Ummm... But if Canadians are such a better risk than what do you make of a Bank of Montreal report that BMO came out with on Monday that noted that almost three-quarters of Canadian homeowners would feel a significant squeeze from even a small rise in interest rates?

The report basically says 73% of the people surveyed can’t afford their own homes. And a lot of them are already feeling the pinch.

A third of these people have already cut back on other spending so they can make the mortgage payment.

One in six has been forced to raid their savings to pay current costs.

This is at a time when interest rates are at historic lows, which means they can only go up. That they will rise, eventually, is inevitable. Yet 16% of the people in the survey said they might not be able to make their payments if rates rose by even a tenth.

So much for Canadian debt being of a higher quality.

Another key factor that Tal insists is ignored in the current housing bubble discussion is how much of our Canadian mortgage debt is locked in for longer terms and not subject to the vagaries of rising rates.

Tal says 70% to 80% of Americans were in variable products at the peak while the Canadian figure is 29% (Tal cites the latest survey from the Canadian Association of Mortgage Professionals for this statistic).

Umm... just a quick question here.  When you say only 29% of Canadians are in variable products... does that mean we don't count a mortgage that resets to a different interest rate after five years?

I mean, aren't ALL Canadians in variable products when you consider this factor?  How many Canadians have 30 year locked in mortgages like in the United States?


Please read disclaimer at bottom of blog.
Posted by Whisperer at 1:40 AM