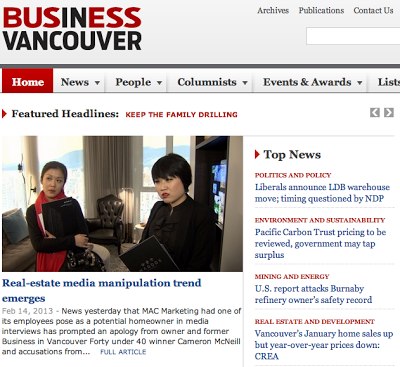 We wrapped up things yesterday by telling you that the Globe and Mail newspaper had picked up on the broader scope of media manipulation by looking at the actions of realtor Cam Good, a MAC Marketing Solutions partner from 2004-2009.
In the early part of 2012, Good was involved in two well documented incidents in which similar deceptions to last weekend's MAC media ruse were conducted.

The first one involved Good telling the the media he was taking high flying buyers from China on a helicopter tour over White Rock.
In a widely covered media event by Global-TV, Good's actions became legendary in the blogosphere.
Turns out the whole production was a lie.  The high flying buyers from China were actually realtors of Asian descent from Vancouver (you can read Garth Turner's post on this issue here).
In another incident, Good used one of his sales agents from Key West Marketing to pose as an investor interested in his new Groupon-style real estate buying gimmick (see details in our post here).
Today Business in Vancouver Magazine (BIV) picked up on these stories. BIV is a local Vancouver media outlet which offers daily newsbriefs, weekly articles and a searchable archive of business related news.
Their lead story today: Real-estate media manipulation trend emerges.

News yesterday that MAC Marketing had one of its employees pose as a potential homeowner in media interviews has prompted an apology from owner and former Business in Vancouver Forty under 40 winner Cameron McNeill and accusations from bloggers that this is part of a wider trend.
MAC Marketing's manipulation of the media involved employee Amanda Lee along with another woman who said she was Amanda's sister Chris Lee. Together they told both CBC News and CTV News on the weekend that they were waiting for their wealthy parents from China to come to Vancouver for Chinese New Year and potentially buy them a condo during the stay.
A blogger who goes by the name @Village_Whisper exposed the manipulation and prompted McNeill to apologize Thursday.
"All I can say is that I deeply apologize for having misled the media for being there," McNeill told media.
"We were busy and I don't know if the girls were put up to it, or just put on the spot, or if it happened spontaneously. Regardless, it was wrong and I take full responsibility, on my own shoulders."
Such tactics seem to be part of a trend of real-estate marketers manipulating media perception to sell condos.
Business in Vancouver has learned that VancouverIsAwesome.com editor Bob Kronbauer is being paid by the in-receivership Village on False Creek, formerly the Olympic Village, to promote life in the village – even though nowhere on his website does it make it clear that he is being paid to do so.
And @Village_Whisper's blog points to a Global TV story in April 2012 where real-estate marketer The Key was launching what it called "Groupon for condos."
The Global TV story by reporter Michelle Miller featured a woman named Tara Fluet, who was listed as an investor in the program to group-buy condos. A woman by the same name has a LinkedIn profile that states that her job is as a sales manager at The Key.
"The public has a right to know the behind the scenes connections when these stories are presented as 'news,'" @Village_Whisper noted on the blog Whispers from the Edge of the Rainforest.
The Key owner Cam Good, who is also a former Business in Vancouver Forty under 40 winner, did not respond to Business in Vancouver's calls for an interview by press time.

Kudos to BIV for following up on this. Will other media outlets follow suit?
As we go into the weekend, we look forward to hearing from Mr. Good as well as hearing back from MAC's President Cam McNeill.

McNeill promised to tell the media the results of his investigation into what transpired with his employees while he left town for the Family Day weekend.

We wait with bated breath.

Meanwhile, BIV was on Global-TV discussing the scam:

The Urban Development Institute has released a public statement on the MAC Marketing controversy (click on image to enlarge): 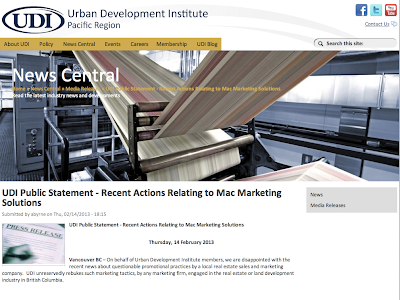 Vancouver BC – On behalf of Urban Development Institute members, we are disappointed with the recent news about questionable promotional practices by a local real estate sales and marketing company. UDI unreservedly rebukes such marketing tactics, by any marketing firm, engaged in the real estate or land development industry in British Columbia.