Could the US foreclosure fraud situation cause another Banking Meltdown? 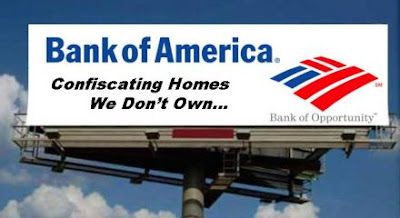 There is an evolving and fascinating story going on in the United States that could become a major, major issued for the economy.

As you know, the housing collapse in the US has lead to a massive number of foreclosures by the banks.

But the foreclosure bandwagon has hit a significant speed bump.

It seems the courts have put the brakes on a number of foreclosures because banks do not have the proper paperwork to execute foreclosure.

This foreclosure document 'problem' is rapidly evolving into a case of fraud on a massive scale, a situation that could affect 60 million properties in the U.S.

In a nutshell banks have lost track of promissory notes signed by homeowners when original mortgages were taken out. In 2008 some big banks could not produce the note that proved it had the right to take back a home. The problem has gotten much bigger as more homeowners discover the banks do not have the original documents.

The root of the problem, apparently, is that after physical paperwork was filled out and signed by the borrower, the banks electronically filed the paperwork into a computerized system called the 'Mortgage Electronic Registry System' (MERS).

According to Florida Congressman Alan Grayson, 60 million mortgages are in MERS.

It appears that after the electronic filing, the banks have lost track of the original paperwork - the note - signed by the borrower for virtually every mortgage filed in MERS.

This is crucial because that 'note' is what actually proves the bank owns the property.

Grayson says, “It appears that on a widespread and probably pervasive basis they (the banks) did not take the steps necessary to own the note... which means that in 45 out of the 50 states they lack the legal right to foreclose... So they have simply created a system where servicers hire foreclosure mill law firms whose business is to forge documents showing or purporting to show they have a legal right to foreclose."

The import of this cannot be understated. Take a moment and grasp the enormity of this problem for the banks.

There are 60 million homes which banks loaned money on, and now they might not be able to legally get the property back if the homeowner defaults!

Another colossal problem is the trillions of dollars in mortgages bundled into mortgage backed securities.

Remember, the banks were giving almost anyone a mortgage during the housing boom which allowed them to create and sell lucrative mortgage backed securities.

So, there are trillions of dollars in mortgage backed securities that now could have NO backing whatsoever!

That means they are worthless!

Would you like to be the pension fund manager who bought that security? Do you think this just might cause an accounting problem for the banks? Do you think this could push some of the big banks into bankruptcy? Will there be another financial meltdown and government rescue?

Do not underestimate the impact of these developments. This past weekend, Bank of America became the latest lender to delay all foreclosures in 23 states because of possible problems with the necessary documents needed to repossess a home. GMAC Mortgage and JP Morgan Chase have had similar problems recently with documents that prove the bank has the right to foreclose.

How long before all foreclosures executed within the past 2-3 years have to be retried? How many millions of existing home sales will be put in jeopardy, those homes which were foreclosed upon and then resold?

There are currently two civil suit proceeding that say the banks do not have proper title to the homes on which they are foreclosing.

All of the big banks have legacy assets which are currently marked up in value to cost and above. Because of the mark-to-market nonsense, this now represents a large amount of capital for the Western world’s financial entities.

And a number of Canada's big five banks also have large exposure to US mortgages.

The biggest question in the financial world today is could the foreclosure fraud situation cause another banking meltdown?

Gold and silver are spiking on the upcoming possibility of QE2.