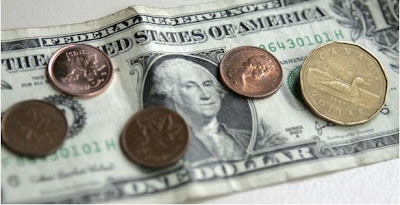 On the right side of this blog some of you will have noticed that under the spot price of Gold and Silver, there is a chart called the US Dollar Index.

This index measures the strength of the US Dollar. A few weeks ago it was up over 80. This week it slid below 77 - which is big news.

It's indicative of a weakening US Dollar.

Perhaps at work you know some co-workers who this week are all giddy that the Canadian Dollar and the US Dollar moved to parity. Some, no doubt, rushed out to exchange loonies for greenbacks for upcoming trips to Vegas or other locals south of the border.

It's not so much a testament to the strength of the loonie, but it owes more to the weakening of the US Dollar.

Such developments are a big concern to OPEC. The oil producing Arab nations trade oil in US Dollars. And a weakening US Dollar means they are getting less for the same amount of product.

"The U.S. currency’s weakness means the 'real price' of oil is about $20 less than current levels," said Venezuelan Energy and Oil Minister Rafael Ramirez after yesterday’s meeting of the Organization of Petroleum Exporting Countries in Vienna.

The OPEC nations want to push the price of oil from the current $80 to $100 to offset the declining value of the dollar.

And since the Canadian Dollar is at par with the American Dollar, it means you and I will also feel this 20% increase in the cost of everything oil related - which is just about every aspect of our lives.

This is another example of currency induced cost push inflation at work.

'Real' inflation last month raged at 8.5%. Look for it to accelerate in the coming months.

As we noted earlier this week, the slow melt is meeting the winter freeze and the chilling sales climate will clash with stubborn sellers in a stalemate which will probably last until spring.

Come springtime many observers believe you will start to see sellers move on their prices and the decline will finally start.

And a primary impetus that will push the stubborn sellers to move on their asking price will be Realtors.

This month BCREA's pumper-in-chief, Cameron Muir, has made much of the declining numbers of listings on the market. He pumps this as a move to a 'more balanced market'.

Through the late summer and early fall, many owners have tested the market waters. They put properties on the market, only to remove them when buyer interest proved to be reduced. Many of these owners plan to put those same properties back on the market and many will likely do so in spring of 2011

As our friends over at VREAA have noted these sellers will be re-entering a market in which local Realtors has seen sales (and by 'sales' we actually mean to say 'commissions') have been at 10 - 15 year lows.

There are a great many Realtors feeling an income pinch right now, a situation which will be greatly exacerbated come Spring 2011.

Look for this pressure to be severely ramped up when many of these sellers return to the market in Spring 2011.

Many observers anticipate ongoing minor price drops through October, November and December. Then, in the first half of 2011, you will probably start to see significant changes.

Speculators, boomers, foreign holders, overextended locals and developers will all come to the market and be met by hungry Realtors desperate for income after 8-10 months of the worst sales in over a decade.

Eager to close deals at almost any price, significant pressure will be exerted to speed the price decline.

It could be an intense spring.

Please read disclaimer at bottom of blog.
Posted by Whisperer at 7:34 PM