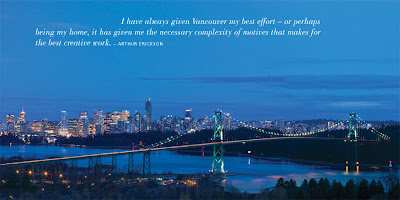 Speaking of vultures, we've all heard about how the City of Vancouver has forced Millennium Development into receivership in order to recoup its $740 million loan to the developers for the Olympic Village in False Creek.

As part of that deal, Millennium’s owners agreed to hand over other assets to the city to sell if the City can’t cover the loan through sales of the high-end condo' in the Olympic Village.

One of those other assets is the Evelyn development in West Vancouver.

But now a lawsuit has been filed against Millennium saying they haven’t been making payments on their loans of more than $75 million.

Backers of the project, Peoples Trust Company, bcIMC Construction Fund Corporation and bcIMC Specialty Fund Corporation, filed petitions in B.C. Supreme Court Wednesday against Millennium Evelyn Properties Ltd., Millennium Development Corporation and Shahram Malekyazadi — one of the brothers who own Millennium — seeking a declaration that the developers have defaulted on their mortgage.

More than $4 million is owed to another mortgage holder.

In the lawsuit, the backers ask the court to appoint a receiver and grant an order giving the backers power to sell the property to recoup their loans.

The City of Vancouver has also registered a charge against the Evelyn properties as part of the Olympic Village process.

Looks like wealthy Asians have a lot of buying to do.

Please read disclaimer at bottom of blog.
Posted by Whisperer at 5:02 PM