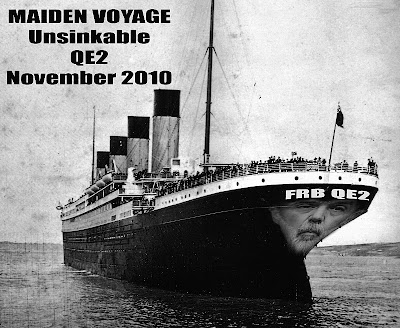 One of the big questions I am hearing locally is whether QE2 will prevent a collapse in real estate here in the Village on the Edge of the Rainforest.

As I have already mentioned, in the normal cycle of classical Capitalism the expansion of credit/debt and rising assets leads to mal-investment and rampant speculation: overbuilding, overcapacity, over-indebtedness and leveraged bets that misprice risk.

This is precisely what occurred in the 1995-2000 stock market bubble and the 2002-2007 housing/real estate bubble; mal-investment, over-indebtedness, overbuilding and mispricing of risk on a grand, unprecedented scale.

All around the Western World the correction has taken hold, with the exception of Canada and Australia.

In the normal scheme of things, all this bad debt would be written off and the assets would be sold/liquidated. Holders of those assets and the debt based on those assets would both suffer losses or even be wiped out. All the overbuilt/overpriced properties and overcapacity would be sold for pennies on the dollar, and the liabilities (debt) wiped off the balance sheet along with all the inflated assets.

There is no other way to clear the market for future growth.

The Canadian Government has been successful in delaying the reckoning with the record levels of stimulus the Conservatives dumped into the economy in 2009.

This is what we have done in Canada, in general, and particularly in Vancouver.

Stimulus can postpone major economic adjustments, but often that makes the ultimate adjustment even worse. And ours is only getting worse.

Put simply, policies and investment practices that are effective and friendly to the short-term can often be destructive and violent to the long-term, particularly when those policies and practices encourage the misallocation of capital.

Everyone is in a tither about how the average price of a single family house in Vancouver rose in October to top the $1 million mark again.

But as we have already discussed, those numbers are skewed.

One mansion in Shaughnessy sold for $17.5 million along with a handful of other sales in the $3 million to $5 million range.

The $17.5 million Shaughnessy house alone juiced the west side detached average price by $108,695.

Will QE2 also juice the market and lead to an increase in sales?

Well it appears the real estate boosters don't think it will.

The Canadian Real Estate Association (CREA) came out with a statement on November 5th (the day after QE2) that 'revised' their forcast for national sales activity downward by 4.9% for 2010 and predicts sales will collapse further in 2011, down by another 9%.

But that's nationally. In BC the CREA sees sales dropping by another 15% in 2011.

Sounds like a "NO" to me on a rebound from QE2.

With sales hovering at their lowest levels in the last 10 - 15 years, a prediction of another 15% drop is not what I would call 'bullish'.

QE2 may juice the stock market for a while, but it will not save the Vancouver real estate market.

What it will do is keep interest rates from rising in the short term, which will prolong the slow melt.

The first is the trailer for the documentary "Inside Job". I had a chance to watch it last night in the only theatre in Vancouver it's playing at (Tinsletown) and it's worth checking out. It didn't explain the crisis as fully as I would have liked, but it does a really good job.

Next is a 7 minute clip featuring Peter Schiff on inflation and QE2. Schiff is bang on with his assessment and this clip is destined to be central to another round of "Peter Schiff was right" videos once this episode fully plays out.

Finally there is a repost of a 45 minute documentary titled 'Overdose: The Next Crisis' for those who may not have seen it the first time around.