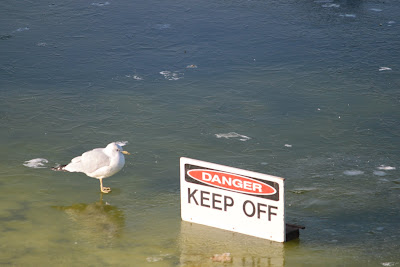 As Arctic outflow winds sweep down across Western Canada, the Village on the Edge of the Rainforest has been plunged into winter's icy grip.

A rare snowfall blanketed the region on the weekend and since then nighttime temperatures have dramatically dropped to -10 Celsius (14 degrees Fahrenheit for our American friends).

But I digress. Lots has been going on locally over the last week and as I have touched base with a number of the local blogs there seems to be a whirlwind brewing about the status of 'our bubble'.

After almost half a year of declining real estate sales, our local market is best described as stagnant. The bubble has yet to burst.

The result is a growing sense of fatigue.

Some buyers, tired of waiting for a crash that isn't forthcoming, are jumping into the housing market. Against better judgement they are taking on massive levels of debt as house lust consumes them.

Meanwhile on the west side of Vancouver, sales gallop along at a pace and with prices that have some suggesting Vancouver is - in fact - different.

It makes me smile.

Perhaps it is because I am not sitting on the sidelines - eagerly waiting for a housing collapse - so that I can make a move and purchase a house in the city.

'A watched pot doesn't boil', goes the famous saying and because prices aren't dropping dramatically, many find themselves doubting what logic and common sense tells them is all too obvious.

As I repeat ad nausam, in 2008 the world suffered a financial earthquake the depth and breadth of which we still do not fully understand, appreciate or comprehend.

Canada enacted a number of emergency measures which shielded real estate in our county from the Great Credit Contraction that is sweeping the rest of the globe.

After experiencing a minor contraction in 2009, real estate appears to have recovered. In reality all we have done is forestall the Great Reckoning.

And no one is better positioned to remind us about what is coming than Mark Carney, Governor of the Bank of Canada.

Over on the blog Housing Analysis, Jesse has transcribed parts of a 15 minute interview Carney did with CBC's Sunday Edition (hosted by Michael Enright).

You can listen to the entire interview here (it takes place in hour two, about 10 minutes in).

As transcribed by Jesse, the most significant comments are listed:

As Carney says, interest rates are still at "exceptionally low levels." They are going to go up... way up.

And for those who have taken on debt on the assumption that interest rates will always be this way, Carney makes it expressly clear they are in for a rude awakening.

It does not matter if there are some people with vast amounts of money who can easily afford the multi-million dollar single family houses in our little hamlet on the Edge of the Rainforest.

When the reckoning comes, when interest rates normalize, there are so many who will affected by a crisis of debt in the Lower Mainland that the exact same chain of domino's that has brought down so many American R/E bubbles will repeat itself here.