The vultures will come, nothwithstanding... 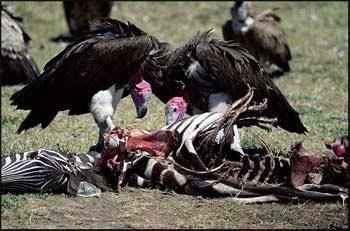 The day after our central bank's Governor restates his warning to Canadians about mortgage debt we are treated to the spectacle of our federal government's Finance Minister telling Canadians there is no housing bubble.

The Financial Post carried a story on Monday wherein Finance Minister Jim Flaherty dismisses the idea that our country might face the same kind of property crisis as Ireland.

“The evidence is not there that Canada has a housing bubble. In fact, the evidence with respect to affordability of mortgages in Canada is solid and we have a stable market,” he told the House of Commons finance committee.

“It’s a long, long stretch to compare our housing market with that of Ireland,” he said.

Of course this is the same man who in late 2008, while the financial crisis was engulfing the Western World, continued to insist that the recession would not come to Canada and that our nation would continue to run a budgetary surplus.

As the crisis deepened, it was Flaherty who insisted Canada would never run a deficit. A claim he made prior to plunging Canada into it's biggest budget deficit in history.

Meanwhile the Globe and Mail runs a story which asks "is Vancouver in a housing bubble?"

We are treated to more of the 'rich Asian' storyline.

The article does contain an interesting passage, though. University of British Columbia historian Henry Yu notes that while Vancouver is popular as a lifestyle destination for those who can afford it, the City is not a place to make a living.

And that's the kicker.

There is no economic underpinning for our real estate market in Vancouver.

Vancouver is not a financial engine. Current valuations are not supported by local incomes, local economic activity, household balance sheets or employment.

And when the domino's start to fall on the 90% of homeowners who live (and earn incomes) here, will the west side of the City become an island that maintains values from a steady influx of rich Asians who will pay exorbitant prices?

Instead they pick at the ravaged real estate carcasses just like any other vulture.

It will be no different here.