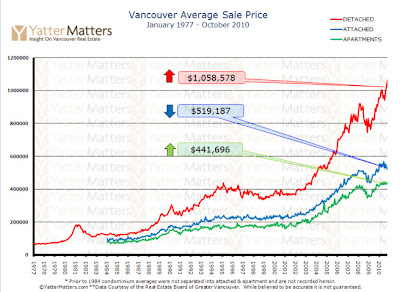 The end of another month and total sales are down again. It's five months in a row now where sales are down dramatically from last year AND where the total numbers are among the lowest in over 10 years.

Yet, for the second month in a row, the average single family house value is once again topping a million dollars.

Largely because some of those houses that are selling are 'high value' homes. When their value is factored into the mix, the numbers are skewed. 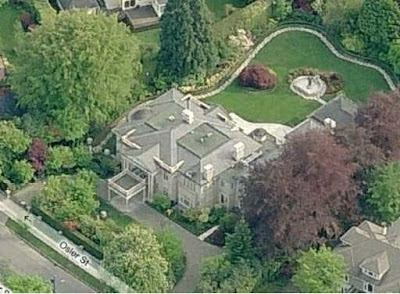 But even at the upper end, the sale gives a glimpse of the current state of the market.

We are constantly told about 'Hot Asian Money' (HAM) and how HAM is driving our market.

In many ways the house is a poster child for the housing bubble.

Hoping to cash in on the growing real estate bubble the mansion's owner, Song Leung, put it up for sale in 2007 (just as the American real estate market was starting to collapse).

According to an August 2007 Vancouver Sun article:

Even in 2007 the media was beating the 'offshore buyer' drum, but those offshore buyers didn't come running to buy. This property failed to sell.

For 3 years this 'top five' Vancouver mansion has been flogged on and off the market. But vastly overpriced, none of the infamous 'HAM' came rushing in to snap it up.

The current assessed value of the property according to BC Assessments is $16,887,000.

Like all commodities, a home is only worth what someone will pay for it on any given day.

It sold for $7.5 million below the original asking price but $613,000 over the current BC Assessment value of the property.

And it has taken over 3 years for the property to sell.

In the process it also skewers this month's average SFH price in Vancouver.

What to make of it?

It's a collection of paradox's and a window into the current real estate situation here in the Village on the Edge of the Rainforest.