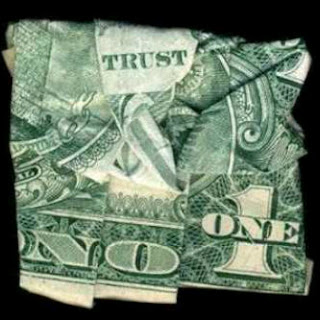 For almost two weeks now, I have have told you to expect a great deal of volatility in Silver and that we would be in for a wild roller coaster ride.
Closer to home I have cautioned many colleagues that I expected a huge beat-down of Silver at some point which could see the price brought down as much as $15 - $30 per ounce. Is this that beat-down?
I was convinced that event wouldn't come until the broader investment community started to move significantly into Silver.
That hasn't happened yet.
Has it come early because the short squeeze on the COMEX is even greater than we think?
Or is this, as the naysayers are trumpeting, simply a bursting of bubble conditions in the precious metals?
The fact of the matter is that Silver is down dramatically this week.  From almost $49.80, the shiny metal is now hovering around $39.35 after dropping to almost $39. 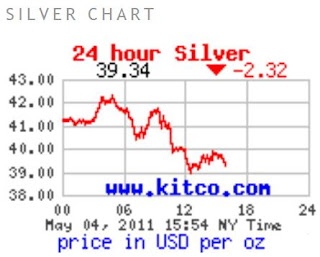 So is the bubble bursting? Or is there another, definitive reason that Silver has dropped so dramatically in price?
If you have any doubts about what's going on, ask yourself two key questions:
Let's look at them.
Silver was going to rise exponentially in value because of increased demand as a result of Sovereign Debt. Have the answers to any of these issues changed?
NOTHING has changed.  None of these conditions have been altered.
If fact, conditions are quite the opposite.  Reuters is reporting that the US Treasury wants a $2 trillion debt cap raise just to keep government operations going until the end of 2012. Meanwhile the budget deficit hasn't been resolved, so government revenue can't operate on the cash that is coming in... therefore that debt can only be added to after 2012.
Unemployment remains stubbornly high. Various budget constraints have limited the scope for easy solutions, even if these were desirable. The debt and deficit dynamics are bad and deteriorating at both state and federal levels. A major rating agency, Standard & Poor's, has already taken the previously unthinkable step of placing the US's AAA credit rating on negative outlook.
There there is this Bloomberg report that came out today reporting that Mexico, Russia and Thailand added gold now valued at about $6 billion to their reserves in February and March as the dollar weakened and Treasuries lost investors money.
Which brings us to the main contradiction... if the bubble is bursting in Gold and Silver, why isn't the US dollar rising?
The fact of the matter is that Silver isn't dropping in price because the underlying support for it's dramatic rise has collapsed.
Silver is dropping in price because an all out paper war has been launched against it in a desperate attempt to suppress it's value and support the US dollar.
We have already talked about how, in the last week of April, the COMEX attempted to engineer a liquidation of silver holdings by those who trade with highly leveraged positions.
And you need to understand that this represents a significant amount of trading.
During that week the COMEX raised margins on Silver traders twice... first by 9%, then by another 10%... in just one week!!
Unable to meet margin requirements when trading opened on Sunday night, delinquent accounts were liquidated. It just so happened that trading in London was closed for a local May 2nd holiday... which meant trading volume was very low. In about four minutes, Silver plummeted $6.10.
This was followed on Monday by MF Global raising their silver trading margin to 175% of the COMEX margin.  More liquidation's were triggered.
On Tuesday the paper war intensified as Interactive Brokers warned traders of a yet unknown (but certainly scary) looming margin increase:
=======================================
To NYMEX,NYSELIFFE traders:

In light of the recent unprecedented volatility in silver markets, the exchanges that offer trading in silver derivative contracts are increasing the margin requirements on these products. In an effort to adequately address the inherent risk resulting from this volatility, we are increasing margin requirements on silver derivative contracts to a level exceeding that which the exchanges are implementing.

You will be notified as more information becomes available.

Please monitor and manage your risk accordingly.
=======================================
What the margin hike's have done is it has forced all the newcomers to the game to have to liquidate their positions or ante up the new margin. Given that most trade futures on margin, liquidation is the only option. For long time Gold/Silver investors, these tactics are reminiscent of the actions taken to suppress Gold/Silver in the late 1970s.

You have to keep this in perspective. No asset has risen so sharply so quickly without meaningful and necessary pauses in price to establish a new base. Even gold, during its run paused now and then to allow for normal ebbs and flows to take place, new bases to form and new launching pads to be built.

Silver didn’t do that. It shot straight up like a rocket. That rocket, thanks in large part to the CME margin hikes has now run out of fuel for a spell.  Will Silver crumble? No way. The fundamentals as to why it ran haven’t changed. The reality is that it just ran too fast with everyone scrambling to try to buy physical or find a vehicle to play the game with.

This is another reason why junior mining stocks have not taken flight like the price of Silver. Rather than being a bad thing, the juniors have been a shield from the recent volatility and risk of the futures market.
In truth, these margin actions are ultimately beneficial to the ability of Silver to push higher and higher.
In the meantime you are being presented with an outstanding buying opportunity.
Remember... the key question to ask yourself is: what has changed?
It isn't the Sovereign Debt issue, that's for sure. Which means this take down can only reverse sharply when it's done.  And that is going to present us with a gift-wrapped buying opportunity.

The paper war continues.  The CME has just announced that margins have been raised for the 4th time in 8 days.  This latest hike is 17%!!!

Two concurrent margin hikes are a move never implimented before.

Please read disclaimer at bottom of blog.
Posted by Whisperer at 2:22 PM