The Debt Days of Summer 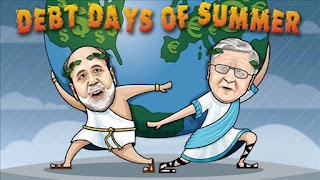 Faithful readers know that I am fond of saying that many of us still do not appreciate the depth, and breadth, of the financial crisis that shook the world in 2008.
It was a profound financial earthquake, the effects of which still have a long ways to play out. In fact the main cause of the financial crisis has only grown bigger and has become a massive threat.
At the heart of the crisis are over-the-counter derivatives (OTC Derivatives) and credit default swaps (CDS), financial products which have been called 'weapons of mass destruction' by critics.
Just before Lehman Bros. collapsed, Wall Street firms were carrying risky financial derivatives on their books with a value of an astonishing $183 trillion.
$183 trillion!!!
That was 13 times the size of the U.S. economy. Since then that figure has grown to $248 trillion!
The 'too big to fail' banks and many other 'too big to fail' companies are  trading OTC derivatives without any collateral backing up the trades.  And as the debt load crashes inward, everything has become about protecting those 'too big to fail' (TBTF) players from massive losses. This has been done by passing those losses onto the taxpayer instead.
The OTC derivatives dealer banks involved in these derivatives speculations are the sole reason why Europe cannot let the PIIGS countries (Portugal, Ireland, Italy, Greece, Spain) default on their debt - even though default is exactly what is needed to solve the problems.


The European Central Bank (ECB) has a €444 billion in PIIGS exposure. All it would take is a 4.25% drop in asset values and the ECB would be bankrupt.
US banks have over $350 Billion in exposure to the PIIGS. If any of the PIIGS fail, more than a few domestic US banks will be wiped out.
But rather than taking the hit and allowing this debt to be destroyed (and those who made the risky bets take the losses), the intricate weave of this derivative disaster is why the Federal Reserve is frantically financing European banks to keep it's crony banker system afloat.

It is what has turned a normal recession into a long term depression.

QE2 was a $600 Billion bailout of European banks according to released Federal Reserve documents.

And the latest bailout tranche paid to Greece by the IMF was nothing more than another $780 million dollars given by US taxpayers to hedge funds.

That's because the actual Greek debt is no longer owed by European banks to the extent it had been previously expected.

As the banks have been selling Greek debt, it has been mostly hedge funds who have been buying it.  The IMF just approved a €3.2 billion ($4.6 Billion) disbursement of cash for Greece, its fifth, as part of the €12 billion in money that Greece needs in order to continue operating in the months f July and August. The entire amount will be promptly recycled by global financial institutions in the form of debt maturities and interest payments, which amount to €18.2 billion in the months of July and August. Simply put - ECB, EU and IMF money in, money owed to bankers out. And 17.09% of the money coming from the IMF, comes from the US taxpayer.

Thus US taxpayers have just paid out about $780 million (of the $4.6 billion IMF bailout) in order to fund interest owed to hedge funds.

If it wasn't paid, Greece would default... triggering massive losses from the OTC derivatives and credit default swaps to the 'too big to fail' banks and companies.

There are only two ways for this to go: allow debt to be destroyed (and trigger a massive Depression) or print massive amounts of money.

The financial crisis still has a long ways to play itself out.

And you know which way things are going to go: QE3 will happen.