It's not the news per se that's important... it's how you spin it. 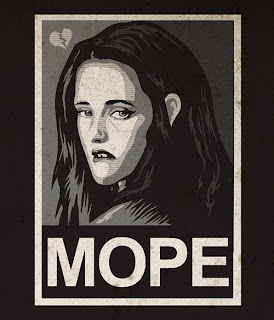 Managing perception.
The concept has become so crucial in modern society that managing perception has become an art form.
Commodities trader Jim Sinclair is famous for deriding all the MOPE he sees in the press today.  That's the acronym he utilizes for all official attempts to put lipstick on the pig of a declining economy: the Management of Perspective Economics (MOPE).
Blogger Charles Hugh-Smith wrote about the practice last month and noted immediately in his post why the great game of perception management is so important:

"The economy will expand if you believe it is expanding - because you'll be 'animal spirited' into buying a lot of stuff on credit that you can't afford."

Smith observes that economists speak of these magical "animal spirits" that fuel economic expansion, but that this is simply a colorful term for perception management: when people perceive others reaping outsized gains in profits or pleasure from taking risky bets and freely spending borrowed money, then they will feel an overpowering urge to follow the herd and leverage their capital (if any) and disposable income (if any) into risky bets and zealous over-consumption, i.e. "animal spirits."
Conversely, when said risky bets blow up and participants have lost their ever-loving derrieres by following the herd, then "animal spirits" quickly dissipate as the herd thunders off a cliff to its financial demise.
The task of the financial/political/media Status Quo is to convince people to overlook the abundant evidence of economic deterioration and focus on heavily juiced "evidence" of robust "growth."
The game plan is this: if the Status Quo can convince you that the economy has righted itself and from here on in everything will get better and better, every day and in every way, then we will abandon financial rationality and start buying homes we can't afford on credit, cars we can't afford on credit and boatloads of stuff from China that we don't need on credit (of course looking cool is a "need," i.e. having an iPad to carry around).
In other words, believing it is so will make it so.
Which brings us to the latest media reports of February's Real Estate results.
The Vancouver Sun headline blares, "Metro Vancouver market balanced, board says: Price for residential properties up six per cent in a year according to report"
The article regurgitates the press released cranked out by Real Estate Board of Greater Vancouver (REBGV) president Rosario Setticasi. It heralds a "pre-spring hike in sales.",
Pre-spring hike in sales?

Haven't we been hearing constantly about how real estate sales are tanking in the Lower Mainland the last 2 months? How is it that we have a "pre-spring hike in sales?"
According to the REBGV:

“With a sales-to-active-listings ratio of over 18%, we see fairly balanced conditions in our marketplace as we move into the traditionally busier spring season. Sales reached 2,545 in February, a 61.4% increase over the 1,577 sales in January.

Wow! A 61.4% INCREASE in sales!!
With a headline like that and opening statements like that, it certainly appears like the market is rip-roaring hot, right? I mean sales are up over 61.4%... holy crap!
Of course that's the perception you're supposed to gleam from glancing at the article.
Dig a little deeper and you see that those 'rip-roaring' February sales actually constitute a DECLINE of 17.8% from the 3,097 sales that were recorded in February 2011.

Which means compared to last year, February 2012 was dismal. Yes they were a huge improvement over a disastrous January 2012, but they were still atrocious.
How atrocious?
The February 2012 sales in Metro Vancouver were the third lowest February total in the region since stats began to be gathered in 2002.
But the headlines and the press statements don't shriek sales are down 17.8% from last year, do they? Nor do they proclaim that February sales were the third lowest total in the last decade.
Of course not! Instead you are fed the line that sales are UP 61.4% from last month.
Then there is the benchmark price.
Not only are such measures highly skewed in a market with low sales volumes (as several sales of high end homes completely distort the averages) but this month's benchmark price comes on the heals of the industry radically changing the way the benchmark is calculated.
With that change put in place during the middle of last month, the REBGV is happy to tell you that the the benchmark price for detached properties increased a whopping 10.5% from February 2011
But as Garth Turner noted two weeks ago, the CREA changed the way the numbers are crunched so that the public accepts a new House Price Index that now masks the evolution of a national housing decline.

Gone will be average prices, replaced by a benchmark number – expressed relative to 2005 pricing, and taking into account property differences and the social aspects of a piece of real estate.

"It’s an even better tool for local real estate boards to mask evolving market realities, hide the early signs of a correction and remove raw data from the hands of consumers. It’s bad enough that the public MLS already omits vital information, such as the number of days a house has been on the market, price changes during a listing or previous sales history. But now being given a broad, homogenized index-based McNumber for a wide area is nothing but soma for the masses."

So don't listen to all that negative press you've been deluged with the past month or so.
It's a shiny happy world out there in bubble land.  Open that wallet. Plunge yourself into debt. It's a great day to buy a house...
... all you need is the right perspective.
==================