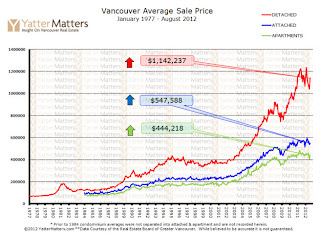 Vancouver’s detached average home prices ricocheted off the cross bar to score an average price goal of $1,142,237 – a price not seen since January and March of this year.

The great thing is that the real estate industry, desperate to hilight positive news, will promote these figures as a sign the market is not dropping.
It will be done to calm fears that it is... and it will also hamstring attempts to pressure the Federal Government to back off.
As Yatkowsky notes in another post, the statistics paint the Vancouver market as "being different."
But a handful of high end sales cannot hide the fact overall sales are abysmal.
Market forces continue to play out and the spinning of the news can only encourage those who have allowed listings to lapse to now quickly jump back in.
It should be interesting to watch September listings numbers to see what comes next.
==================


Please read disclaimer at bottom of blog.
Posted by Whisperer at 9:49 AM