Has the Boomer Trigger now been pulled in Vancouver? 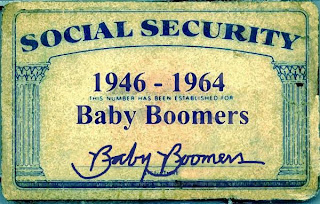 Faithful readers know we have often talked about the Boomer Trigger.
The majority of the self-indulgent Boomer generation have failed to prepare for their senior years.
Seven out of 10 Boomers do not have enough money set aside for retirement. And since 2011 marked the beginning of the great Boomer transition into retirement, this financial planning statistic is significant.
Starting in 1946, the demographic Post-World War II baby boom began. And the Boomers at the front of this wave have benefitted most from seemingly everything.
After having been raised in the post-war affluence of the 1950s and 1960s, the first wave of boomers entered their mid 20's starting in 1971. As they settled down between 1971 and 1976, these first Boomers bought homes which sold for between $40,000 and $60,000 in suburb communities like Richmond.
Now, as these Boomers head into retirement without adequate funding to carry them through their golden years, the vast majority have a very simple retirement plan: sell their bubble inflated asset of a house, downsize and live off the proceeds.
A average house on a large lot bought in 1971-1976 in for between $40,000 - $60,000 is now 'worth' between $1.5 - $2.5 million dollars.
Thus the Boomer Trigger... trigger the sale of the one significant asset they have to fund their retirement. At the same time, if the market slows, Boomers can use their original purchase price advantage to under cut other sellers in a collapsing market - a maneuver which has the potential to crash the market if done by a large number of Boomers at the same time.
Have we seen another example of this trend in the Vancouver neighbourhood of Quilchena?
This is 2681 McBain (hat tip to ZRH2YVR): 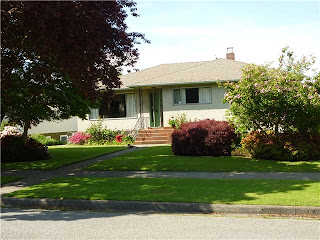 This 3 bedroom bungalow (advertised as having 4 bedrooms and 2 bathrooms) near Prince of Wales School has had the same owner since it was purchased in 1955.
I shudder to think what they paid for it then.
It has been languishing on the market and the desperate Boomer has cut the asking price to $1,599,000.  Here is a screenshot of the listing: 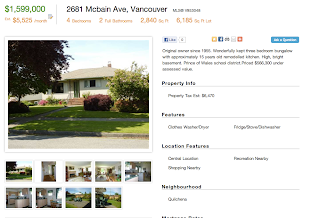 The key element is in the listings description:

Word is 2681 McBain has now sold... and for less than the most recent asking price.

Now you should know that on the r/e chat boards, Real Estate bulls have been quick to point out that it wasn't a massive amount of inventory on the west side combined with a dearth of sales that resulted in a sale so dramatically below assessed value.

The neighbourhood speculative builders and many Asians wouldn’t purchase it because it was at the end of a T-steet. Apparently this is a big no-no for the all important Asian 'Feng Shui'.


About two weeks ago I was viewing a new build in the area and started talking to a Caucasian couple at the open house. I told them about the McBain house and their first reaction was “yeah, but it’s at the end of a T-street so it has little resale potential”. I was shocked at that comment and replied that it was a much superior location with much less traffic (probably less than 20 cars a day drive down that street) than the one we were viewing. Regardless of whether the T-street thing makes any sense, it WAS the reason for the reduced price as the long-time older owner simply couldn’t take care of the house anymore and was motivated to sell.

Two houses in the 2400 block McBain sold a couple of months ago in a crazy bidding war. One was purchased as an “investment” by an Asian man living across the street. It is the one now being rented out. The one next door to it (which wasn’t even listed) was purchased by someone who “lost” the bidding war; it is now back on the market for about $2,670,000 – about 150,000 more than they paid for it. Another house across the street at 2408 McBain is another slightly renovated flip – purchased last year for about $2.2 million, it’s now back on the market for about $2.6 million!

Any truth to this? Perhaps.

The one part I do agree with is that the reduced price was because the long-time older owner simply couldn’t take care of the house anymore and was motivated to sell... which is the whole essence of the Boomer Trigger. She had the ability to move significantly on the price, she wanted to sell the property, and she pulled the Trigger.
So now we have a Vancouver west side property that has sold for about $600,000 BELOW assessed value as a result.
The Boomer Trigger at work. I expect to see more like this if sales continue to stagnate.
==================

Posted by Whisperer at 6:00 AM