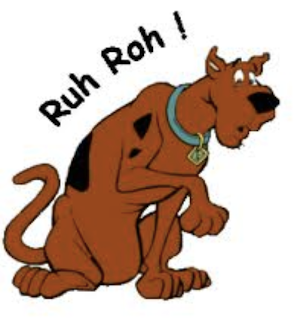 Besides bringing the collapsing housing bubble issue front and centre, the real estate industry is all a tither about the defacto way in which Macleans presents it's argument.

The industry is pissed Maclean's didn't allow access to their spin.

Local Richmond realtor, Arnold Shuchat even popped by our little corner of the internet and offered the following response to the article in our comments section:

As usual, the general press when trying to get into the specifics of a particular industry without any detailed knowledge of same creates eye popping headlines which are of more relevance to its business than to the target of its supposed study.

Faithful readers have been jumping all over 'Alphabet Arnie' (a moniker one commentator dubbed him with for using his education credentials after his google ID), but it is worthwhile noting that Mr. Shuchat is one of our local real estate agents who has been very upfront about the evolving maket conditions during the past year.

Every week Shuchat will post the top 10 price declines for properties in Richmond as well as keeping track of notable price declines in various neighbourhoods around Richmond.

The average observer may have had his head in the sand in Vancouver, but the market has already moved down some 25% depending upon the particular sector.

When was the last time you saw a realtor come out and tell you the market has already dropped 25% in places?  Instead all we hear from most is that the market is 'flat'.

Shuchat is from Richmond and as we know all too well, Richmond has been ground zero for last year's implosion ever since the images of the Japan Tsunami spread around the globe.

[One wonders how Friday night's Tsunami warning might jar memories for prospective buyers considering the delta lands in the coming months, but that's a topic for another post]

Notwithstanding, Shuchat acknowledges he is in the eye of the current collapse.  But going forward he see's things starting to turn around:

Being right in the middle of it, I detect a renewed vigor among buyers as of the end of November... I see prices holding firm and buyers coming back in. The effect of all this now, is that garbage will not sell as fast as it would have and properties will have to be better prepared for the sale.

Shuchat says many Richmond properties are owned by people who "do not have to sell."

Frankly, from the inside of this industry, I think MacLeans missed their call by about 8-11 months in the west coast market, and, short of producing additional fear into the market by their article, signals to me that additional opportunities can be reaped in the existing climate by betting against broad brush articles with incendiary pictures produced by newsmaking press.

The incendiary pictures being painted by the newsmaking press are their attempt to capture what is actually happening.  With that in mind, I can't help but focus on a key point Shuchat makes: that Macleans has missed their call by about 8-11 months.

Has the market been 'flat' the last half year or has it been crashing for about 8-11 months?

Fellow blogger Observer, at his blog Vancouver Price Drop, brings this question to the forefront  in his latest post and offers a stunning comparison between Vancouver  (at our current stage of our collapse) and with what has happened in the United States.

How does Vancouver compare with other US cities at the same stage of the popping of their real estate bubble?

In Vancouver, the peak looks to have been May 2012.

If we look at the westside of Vancouver, 6 month into the unwinding we are down -8.6%.

At this rate it's not a stretch to believe it will be down 15% after 12 months.

Using the Case-Shiller data for single family homes, how does this drop stack up against our US counterparts? (click on image to enlarge): 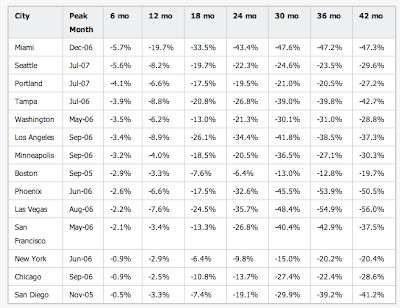 6 months into our drop, Vancouver's westside had dropped 50% faster than ANY AMERICAN CITY! And we are on track to be ahead of all cities, except Miami, after 12 months.

As Observer notes, this is not a "flat housing market" nor is it a "soft landing."

Maclean's is really the first mainstream media to report on what is happening.  Given the dynamics of the recent mortgage rule changes, current evolving economic conditions and levels of Canadian household debt... they don't see the conditions that will put the brakes on this slide.

How can you blame them for forecasting anything but a crash?

It will be interesting to see their cover six months from now.


Please read disclaimer at bottom of blog.
Posted by Whisperer at 12:09 PM