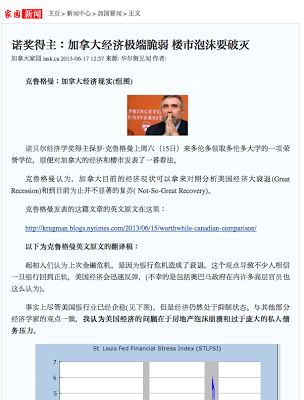 If your Mandarin is a little rusty, it reads: "Nobel Laureate: Canadian economy is extremely fragile. Housing bubble about to burst” (hat tip VMD on Vancouver Condo Info)

It's Paul Krugman's article, which on this side of the ocean has been headlined: Paul Krugman warns Canada vulnerable to a ‘big deleveraging shock’

The Nobel prize winner suggested Canada is an important test case for what lies behind the 2008-09 recession and the sluggish recovery. In other words, if the U.S. experience is anything to go by, Canada might be undergoing a housing and debt bubble, and if so, he advised people to watch what happens next.

With interest rates at ultra-low levels and Canadian household debt and housing market stabilizing, market strategists and economists like Krugman here are scrutinizing every bit of economic data for clues on what the economic outlook will bring....


Krugman sees potential red flags in the large spread between U.S. and Canadian house prices, and the fact that Canadian household debt levels are climbing even as U.S. ones are declining.


"So if the new non-centered bank view is right, Canada ought to be quite vulnerable to a big deleveraging shock despite its boring banks," he wrote. “Of course, people have been saying this for several years, and it hasn’t happened yet — but remember, the U.S. housing bubble took a long time to pop, too."

So Krugman now joins the chorus waiting for the Canadian bubble to burst, it's lofty real estate values not appearing to have realistic means of support.

And more importantly that viewpoint is gaining coverage in China.

Meanwhile Scotiabank is out with a report that notes:

"housing corrections often last years...and this one is unlikely to be any different"

So if HAM (Hot Asian Money) is going to come flooding back to support our housing values, it's going to have to buck the conventional wisdom that Vancouver is overvalued and a sure investment loser.

"Prices in Vancouver are... fairly valued... It's a wonder that prices aren't even higher"

Are you ready for another round of R/E hype about how 'now's the time to buy?'


Please read disclaimer at bottom of blog.
Posted by Whisperer at 7:37 PM