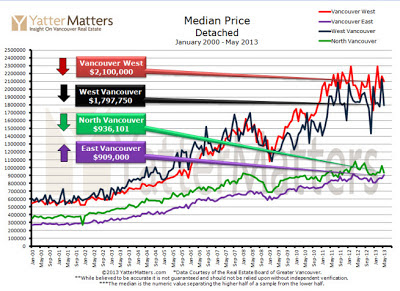 In pop culture the blue pill and its opposite, the red pill, are symbols representing the choice between the blissful ignorance of illusion (blue) and embracing the sometimes painful truth of reality (red).

In the movie, the main character Neo is offered the choice between a red pill and a blue pill. The blue pill would allow him to remain in the fabricated reality of the Matrix. The red pill would lead to his escape from the Matrix and into the "real world".

Realtor Larry Yatkowsky plays off the pop culture pill reference in his latest post which gives us the median price data from May, a contrast from May's average price data a few days ago.

Of course data is meaningless without the right spin and the real estate spinmeisters are in overdrive this month as the battle for 'consumer confidence' is endlessly waged.

May is often considered the bellwether month for real estate sales. And while the number of home sales last month is still well below the 10 year average, the numbers are up from last month and there is an increase year-over-year in some categories.

Of course 2012 was a dreadful year so any increase, no matter how small, is cause for celebration right?

For example there were 1,212 detached property sales in Vancouver in May, up from April’s 1,064.

So it all comes down to how you want to look at it.


The real estate industry (naturally) see's great potential in this data. Toss in the fact that a condo listed for $28 million in downtown Vancouver - which has languished on the market for almost 2 years - has now sold for $3 million below it's asking price (yet still setting a record for the most expensive condo sold in Vancouver) and the fodder is there for the spinners to declare the correction over and real estate taking off towards a new housing boom!

It's all about confidence and massaging that theme is sure to take on prominence in the coming weeks.

Perhaps the coming glut of 'good news' will perk up these sellers? Observer's Vancouver Price Drop is back after a three week break. He has the monthly drop for May 2013 for us and and the top 20 properties this time around combine for a stunning $98 million in price cuts from their original asking prices. If there's a group that needs confidence and massaging it's this bunch.

Presumably they are still depressed from reports, like this one, which trumpet that Canadian homes remain the most overvalued in world wide rankings.


Please read disclaimer at bottom of blog.
Posted by Whisperer at 4:17 AM