So how come we haven't heard much about the Chinese New Year home buying spree this year? 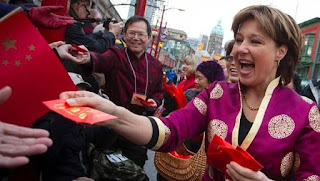 So it's mid February and usually the real estate cartel is barfing out stories about how Chinese have come over to our shores on home buying trips for their kids.
It's become an annual tradition to hear this crap.  Here's just a couple of twitter posts from 2015/2014 to illustrate (click image to enlarge):

And with Premier Krusty gutting the Foreign Buyers Tax at the end of January (presumably it's news of this glorious move that's in those little red envelopes above), expectations soared that Cam Good's yellow helicopter might once again fly over the Lower Mainland.
In fact the Real Estate TV Network (RETV)... err... Global BC announced the wet coast's annual heralds of spring just three weeks ago... 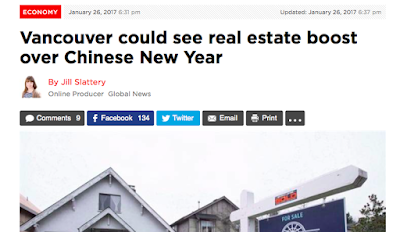 "Vancouver’s slow-churning real estate market might see a slight uptick next week due to an influx of Chinese New Year vacationers.

The Chinese national holiday – celebrated widely in Vancouver and around the globe – begins Friday night with a week-long holiday. Many take the time off as an opportunity to travel abroad. Last year, six million Chinese left the country for vacation.


Juwai.com, a China-based website for international real estate, says a quarter of Chinese consumers surveyed plan to travel internationally during Chinese New Year, with 42 per cent of those saying they plan to shop for property while away. In total, just under 11 per cent of all people surveyed said they’ll spend the holiday property hunting.

The website also surveyed 163 realtors in Canada and found 17 per cent of international agents and 16 per cent of Canadian agents had been contacted by buyers who plan to visit during Chinese New Year.

“We also see Vancouver getting a steady stream of Chinese visitors seeking a ‘lung cleansing’ holiday,” Charles Pittar, CEO of Juwai.com, said. “Canada is a top-five country for these trips. Other top lung-cleansing spots are Japan, Thailand, Australia and Switzerland. One-half billion Chinese were affected by hazardous smog this winter. They come to Vancouver for clean air, among other things.”

So how has the 'lung cleansing' gone so far this year?
Not that we have heard it on RETV Global BC, but reports are that Chinese New Year Sales of Vancouver Real Estate Are Down 78%.
Now besides debilitating Cam Good, an 80% drop in sales is nothing short of devestating. But the  drop in single family home sales - the bread and butter of the foreign Asian market - is even more spectacular. As the above article notes, "Sales of detached homes had the largest drop during this Chinese New Year vs the years prior. Just 119 sales were logged this year, an 87.28% decline from last year."
Yikes. And it's not just the detached market. Chinese New Year Condo sales are reported to be down 72% and townhouse sales down 78%.
Rumour amongst some agents is that pressure is being applied to the BC Liberals to cut what remains of the Foreign Buyers Tax, currently sitting at 15%, to something much lower.
We will see what happens next.
==================


Please read disclaimer at bottom of blog.
Posted by Whisperer at 3:31 PM