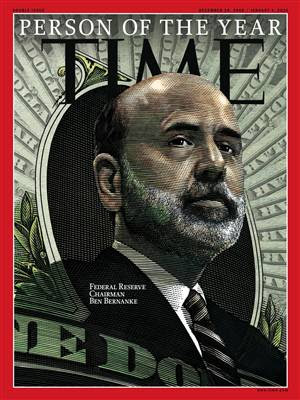 The big news yesterday was Ben Bernanke's non mea culpa for the US Federal Reserve on the housing bubble in the United States.

While addressing the annual meeting of the American Economic Association in Atlanta, Bernanke said that a lack of regulation, rather than low interest rates, was the main reason for the housing bubble which, when burst, was largely responsible for the recent global financial crisis.

Bernanke argued that the housing bubble began before the Fed pushed interest rates low and that the size of the bubble cannot really be explained by monetary policy alone.

Perhaps more importantly, however, Bernanke makes the extraordinary claim that regulatory and supervisory policies would have been effective means of addressing the run up in housing prices. What makes this claim so extraordinary is that it completely ignores the fact that regulatory and supervisory policies weren’t just ineffective at popping the housing bubble—they were actively fueling it.

“Clearly, for lenders and borrowers focused on minimizing the initial payment, the choice of mortgage type was far more important than the level of short-term interest rates,” Bernanke said.

Bernanke argues that exotic mortgages and rubbish underwriting standards that he thinks are “the key explanation” for the housing bubble. But he ignores the fact that these “alternative mortgage products” were created in response to regulatory pressure to expand home ownership.

In many ways it echos the ignorance that is going on in Canada right now.

In the United States the process looked something like this:

There was no one single factor that caused the collapse. Rather, an there were many, many failures occurring in a very specific order that contributed to what occurred.

Inadequate regulations and “nonfeasance” in enforcing existing regs were, as Chairman Bernanke asserts, a major factor.

But the regulatory and supervisory failures came about AFTER the 1% Fed rates had set off a mad scramble for yields. Had rates stayed within historical norms, the demand for higher yielding products would not have existed — at least not nearly as massively as it did with 1% rates.

In Canada we had the combination of low interest rates in the 2000's combining with the Federal Government expanding the amortization period for mortgages from 25 years to 35 and then 40 years. Direction to the CMHC to approve higher, riskier candidates and, in the last year, ultra low interest rates.

The non mea-culpa in Canada has been Flaherty and Carney coming out and warning Canadians that they have to be 'prudent' along with lending institutions... as if those above mentioned policies weren't directly responsible for what's going on.

In the US, Bernanke's failure to recognize the Fed's role in the crisis will prevent him from taking those measures needed to avoid another crisis.

In Canada, our official's artful dodging will prevent them from undertaking the harsh, short term actions now that could mitigate/diffuse the hard crash that is coming.

Please read disclaimer at bottom of blog.
Posted by Whisperer at 11:07 AM