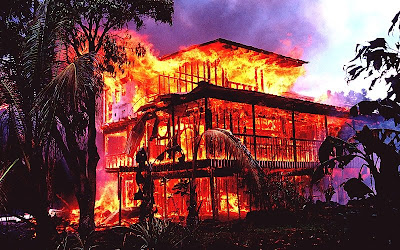 The crisis of 2008 was a financial earthquake whose scope, depth and magnitude is still to be fully appreciated by most.

When Lehman Brothers went down, it triggered one of the biggest corporate debt defaults in history. It also ignited the biggest stock market meltdown in decades.

By the time the smoke had finally cleared, Lehman’s bonds attracted bids of 8 cents on the dollar, resulting in staggering losses of $365 billion.

As noted on SeekingAlpha, about 350 banks and investors were thought to have insured $400 billion of Lehman’s bonds through complex derivatives, known as credit default swaps (CDSs), causing even deeper losses and mayhem in the markets. A fifth was wiped off London Footsie shares. In Tokyo the Nikkei-225 index lost 10% of its value in a single week.

What's fascinating is the prevailing attitude amongst the general public that the crisis has past and that disaster has been averted.

We've watched as the world’s wealthiest nations responded to the crisis, acting in solidarity, with a rescue package of $12 trillion, equal to a fifth of the entire world’s annual economic output.

Capital injections have been pumped into banks in order to prevent them from collapse. In order to stabilize the financial system, central banks pumped over $5 trillion of liquidity support into the system to soak up toxic assets and guarantee bank debt.

In order to finance this and prevent a second Great Depression, the G-20 issued an avalanche of debt, equal to 10% of their combined GDP in 2009, the biggest since the Second World War.

Essentially, the British and US governments have bankrupted their national treasuries in a desperate effort to preserve the wealth of their financial elite.

And, for the moment, many believe the efforts have succeeded.

But tremors from the collapse of the House of Lehman have destabilizing the weakest link in the eurozone’s economy. The sharp downturn in global shipping rates has taken its toll on Greece, which leads the global shipping industry.

With Greece's top income earners - shipping and tourism - slumping badly, gunslingers in the world’s money markets have focused their sights on the sovereign bond market of Greece, which trades a paltry $1 billion per day. Speculators have bid-up the cost of insuring Greek debt to a record high.

A frenzy of fear has been whipped up over Greece’s budgetary woes, and speculators have profited by short selling the euro, against all other major currencies.

Greece’s debt totaled €298 billion at the end of last year, equaling 120% of its GDP. The size of its debts is five times that of Moscow’s when it defaulted in 1998. The links go deeper, to German banks holding €500 billion in loans outstanding to Greece, Ireland, Portugal and Spain.

Strategists at Deutsche Bank are stirring up the animal spirits, by warning that the escalating cost of insuring against debt defaults by Greece might be a “dress rehearsal” for a similar attack on the British Gilt market. The UK is running a budget deficit at 13% of GDP this year, exceeding that of Greece. As a proportion of GDP, the budget deficit is the largest ever outside wartime. Britain sold a record 225 billion pounds worth of Gilts last year, but that was almost entirely monetized by the Bank of England via its asset purchase scheme to pump money into the economy.

With the Bank of England’s quantitative easing now on hold and more than 200 billion pounds worth of gilts to be auctioned this year, the British gilt market could be a ticking time bomb, ready to explode at the slightest hint of a serious outbreak of inflation.

It is estimated that European governments will need to borrow 2.2 trillion euros (19% of GDP) from the capital market in 2010, in order to finance large deficits and roll-over existing debt, the largest borrowing binge in decades. Gross borrowing (including maturing and new debt) is projected to be largest in France (454 billion euros), Italy (393 billion euros), and Germany (386 billion euros).

The bond vigilantes have set their sights on sovereign debt and the next chapter in the financial crisis of 2008 is only starting to play out.

If you read the newspaper accounts of the day, in 1932 the prevailing attitude was that the financial crisis of 1929 had been contained and the crisis had past.

The similarities to the attitudes of today are striking.

Email ThisBlogThis!Share to TwitterShare to FacebookShare to Pinterest
Labels: Economy