This will be the fourth post in our series this week.

Western economies are witnessing a massive decline in new business and consumer borrowing. Consumers and businesses are being pressured to pay down outstanding debts plus widespread defaults and foreclosures forcing lenders to write off massive amounts of debts.

Credit is being sucked out of the consumer and corporate economy at a torrid pace while, conversely, huge amounts of credit are being grabbed by federal and local governments to finance their giant deficits.

The current economic recovery is being bought and paid for by government through stimulus programs. The idea is that once the economy recovers, the private sector will take over and the recovery will flourish.

The catch-22 is that new business and consumers can't get that credit, so the recovery won't take hold in a meaningful way.

Which is why a sovereign debt crisis — and future difficulties by governments to continue borrowing — is such a threat. If the U.S. economy is just limping along even with massive government support, what kind of paralysis will hit if the U.S. government cuts back that support to curtail out-of-control deficits?

One thing that is almost a given is that - unless forced to - liquidity and quantative easing will continue to be thrown at the system in an attempt to jump start the economy.

The bottom line is that with the massive supply of government bonds on the way, prices will be driven down and long-term interest rates up. Short of a miracle, there is little hope to avoid this outcome. Furthermore, as the federal deficit continues to grow out of control, the Great Credit Crunch is going to get even worse.

If credit remains scarce, the odds increase greatly for a long, multi-year recovery. If so there will probably be a violent double-dip recession beginning later this year.

With this as a backdrop, let's look at the current Canadian situation.

In Canada, the federal government responded to the crisis much as the USA and the UK did. Quantitative Easing and virtually 0% interest rates.

Have they learned nothing from the past decade?

Our own Bank of Canada Governor has alluded to the looming danger. On October 27th, 2009 Carney said that "we are awash in moral hazard. If left unchecked, this will distort private behavior and inflate public costs."

Moral hazard is an old bit of insurance jargon that describes how people misbehave when they think they are covered against risk.

And we are ‘awash in moral hazard’.

When the Bank of Canada cut interest rates to virtually zero and purposefully dumped cheap money into real estate; reckless buying and lending exploded over and above the bubble that blew up from 2001-2008.

CHMC reports show 57% of all real estate purchases in 2009 coming from first-time buyers (double the number from 2008) and all of those first time buyers are putting down the minimum 5% - meaning they are all utilizing CMHC’s bank-saving insurance.

And because CMHC - a federal government agency - backs all these high-risk mortgages with taxpayer dollars, all the risk for making these loans is removed from the banks. It enables Banks to lend to people who don't have money and little prospect of paying their loans off. It enables Banks to give these high risk borrowers the lowest mortgages rates available despite the fact they have the highest default risk.

Why? Because no risk accrues to the banks because of the CMHC insurance.

Eombine these government guarantees with Canada's supposed reputation as a 'fiscally prudent' country, and you have money flowing from around the world to help securitize these mortgages making money readily available to more Canadians for even more borrowing.

And just how deeply in debt are Canadians?

Jonathan Tonge has updated his excellent set of statistics on this issue on his blog. (Note from Tonge: The following graphs show the actual changes to outstanding credit [blue line]. They also show two other lines. Both make changes to the 1999 balance only [or 2002 in the case of household credit]. The inflation line shows what the credit would look like had the 1999 balance grown at the rate of inflation. The purpose of the disposable income line is to show how much debt would exist if the debt-to-disposable income ratio was maintained at the 1999 level - which even then was a historically high figure.) 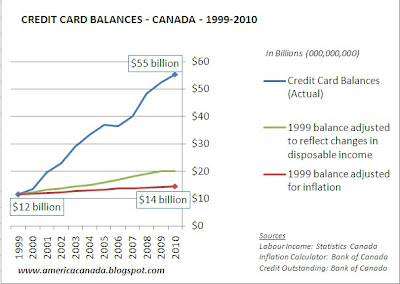 It doesn't take a rocket scientist to foresee a huge problem for Canadians as they try to sustain this debt level when the credit ceases to expand or more likely, contracts.

If Canada was going to have a resurgent ecnonomy with real wealth gains, then this would drive the debt to disposable income rate down. Real higher incomes provide savings and the ability to pay down debt.

As outlined above, this is looking highly unlikely.

The fact of the matter is that the current Canadian incomes and the economy are heavily inflated by debt. 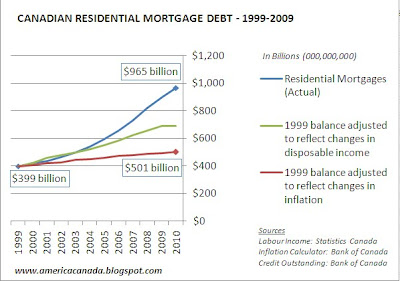 The $965 billion is the figure quoted most often by the media. But it's missing an important trend that has occurred over the past ten years. Canadians have been tapping into the their home equity to finance purchases and mortgages at extraordinarily low variable interest rate through Home Equity Lines of Credit... 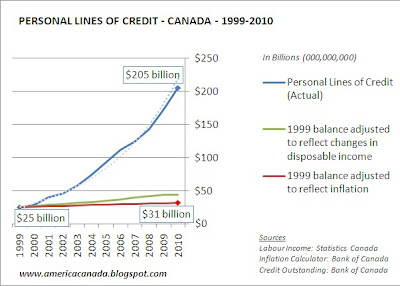 Home equity lines of credit have become a vertible piggy bank for Canadian consumers. They use them to finance everything from cars to furniture to home renovations, and of course, additional mortgages. 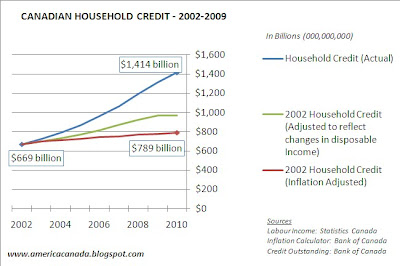 As a result of credit cards, lines of credit and residential mortgages, household credit has expanded from $669 billion in 2002 to $1.41 trillion in 2009. Despite a small reprieve for a couple months in early 2009, it has been growing by roughly ten billion per month. By the end of 2010, Canada's household debt-to-disposable income will be roughly 155% (currently 146%).

In Canada the stage is set for a collapse of massive proportions.

Flaherty and Harper insist that Canada is sitting the catbird seat and that the Canadian economy will recover even while our largest trading partner, the United States, founders.

Recall that these are the same Masters of the Universe who said the growing recession in the United States in early 2008 wouldn't impact Canada at all.

Meanwhile 1/3 of Canadians are struggling financially.

Ask yourself, what happens when interest rates double, and the cost of debt does as well? Other studies suggest that Canadians are wildly overly optimistic about their financial picture. Canadians feel that they'll retire comfortably but can't verbalize or explain how that will happen. What happens when they come face to face with the reality that they are retired and not prepared?

Everyone says the nation will ride the economic recovery of the Far East and China, and that everything will be alright because of our commodity and resource rich land.

Tomorrow we will take a closer look at that.

Email ThisBlogThis!Share to TwitterShare to FacebookShare to Pinterest
Labels: The Canadian Situation