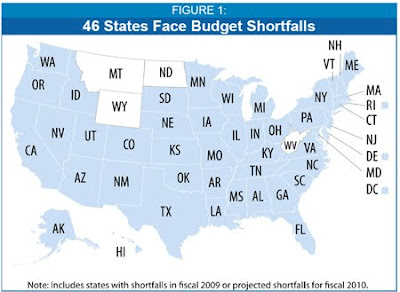 In California they are gridlocked over how to close a $19 billion budget gap and are weighing the termination of the main welfare program for 1.3 million poor families or borrowing more than $9 billion in the bond market.

Illinois, tied with California for the lowest credit rating of any state, is diverting a rising portion of tax revenue to service debt.

In total Forty-six states face budget shortfalls that add up to $112 billion for the fiscal year ending next June, according to the Center on Budget and Policy Priorities, a Washington research institution.

“States are going to have to cut back spending and raise taxes the same way Greece and Spain are,” says Dean Baker, co- director of the Center for Economic and Policy Research in Washington. “That runs counter to stimulating the economy and will put a big damper on the recovery in the latter half of this year.”

It appears that across the United States, all that stimulus money is drying up and States don’t have a choice anymore, their problems are going to require major surgery.

The risk is that California ends up like Greece, with no one trusting that it can get its financial house in order, says Steve Westly, California’s Democratic treasurer from 2003 to 2007. “It has to be a combination of cuts and revenue increases,” he says.

Will the federal government hang the US States out to dry or will they bail them out like they did Wall Street?