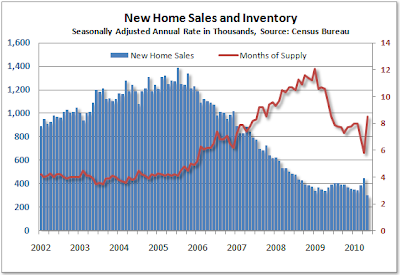 So as stats come out showing that the Real Estate market in Vancouver and Canada is stalling (albeit while contradictory reports flood the media that Asian money is buying up everthing in sight in the Lower Mainland of BC), it begs the question... how's the recovery going in the US?

Not so good, apparently (see chart above).

The US Commerce Department reported that new home sales in America plunged 33% to an all-time low in May following the expiration of the government’s homebuyer tax credit in April. If not for the massive downward revision to the April sales total, from an annual rate of 504,000 to 446,000, the monthly decline would have been more than 40%

In short... the situation in the United States is worse than ever.

And with Europe in financial dire straights, an important stage of the financial crisis of 2008 is about to play out.

Since the crisis began a debate has raged, a battle.

On one side are those who espouse Keynesian economics - combat the crisis by spending endlessly to avoid deflation and another depression.

On the other side are those that believe austerity is exactly what the system needs to purge the credit-crazed and real estate-mad phase we have been riding since 1980.

In Canada our Keynesian experiment involved massive bank bailouts, although listening to the malarky being spouted now, our country never threw a dime at the crisis.

We are told that the securitization phenomenon that let U.S. banks sell dubious mortgages to unsuspecting buyers never developed in Canada. Only about one-quarter of Canadian mortgages were securitized in 2007 (it was 60% in the U.S.), and they were solid, government-insured mortgages, not sliced, diced, leveraged subprime junk.

The 'solid' Canadian banking system saved the day, goes the platitude, and that's why in the U.S. (and elsewhere) near-zero interest rates haven't inflated housing prices. America's banking system is so sick that there just isn't much lending, while ours is healthy.

The fact is our government threw everything they could at the crisis in order to keep our real estate market juiced and our banks afloat.

That's why credit continues to flow in this country. The Federal government is guaranteeing all that money.

We've thrown so much money at the problem that Kevin Page, the controversial Parliamentary Budget Officer came out and said that the Federal Government's orginally announced 2 year deficit (since expanded to 5 years) is now worse and that there's no way we’ll be balancing our books in 2014. Canada now has a deficit so large it is now structural and will probably be with us for an entire generation.

But because America and Europe have been spending like drunken sailors, record setting debt seems tame by comparision.

The question now is which way is the world going to turn?

Keep spending and ramping up sovereign debt or slashing debt.

A giant philosophical battle is about to intensify.

Please read disclaimer at bottom of blog.
Posted by Whisperer at 7:47 AM