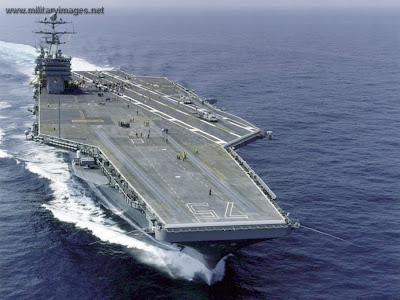 We will file this one under the heading, 'Black Swan Alert'.

Arabic newspaper Al-Quds al-Arabi reports that 12 American warships, among which one aircraft carrier, as well as one Israeli corvette, and possibly a submarine, have crossed the Suez Canal on their way to the Red Sea.

Concurrently, thousands of Egyptian soldiers were deployed along the canal to protect the ships.

The passage disrupted traffic into the Suez canal for the "longest time in years." The Jerusalem Report confirms this passage.

Two other carriers are already deployed in the region, with the CVN-73 Washington in the western Pacific as of May 26, and the CVN-69 Eisenhower supporting operation Enduring Freedom as of May 22.

It isn't clear what the third carrier group may be yet but reports suggest it is almost certainly the CVN-75 Harry S. Truman (pictured above).

This follows reports by the Times newspaper of London that Israel has deployed three nuclear cruise missle armed submarines along the Iranian coastline.

These developments add credence to the rumours about munitions stockpiling on the British island of Diego Garcia in the Indian Ocean.

Back in March the Scottish newspaper, The Sunday Hearld, revealed that the US government signed a contract in January, 2010 to transport 10 ammunition containers to Deigo Garcia. According to a cargo manifest from the US navy, this included 387 “Blu” bombs used for blasting hardened or underground structures.

The suggestion was that these powerful US “bunker-buster” bombs were being shipped in preparation for a possible attack on Iran.

Experts speculated that the bombs were being put in place for an assault on Iran’s controversial nuclear facilities. There has long been speculation that the US military is preparing for such an attack, should diplomacy fail to persuade Iran not to make nuclear weapons.

Although Diego Garcia is part of the British Indian Ocean Territory, it is used by the US as a military base under an agreement made in 1971.

Please read disclaimer at bottom of blog.
Posted by Whisperer at 12:43 PM