Pictured above, for faithful readers not from the Village on the Edge of the Rainforest, is a map of the Greater Vancouver area (click on the image to enlarge).

To the far left you can see the City of Vancouver proper. To the right, straddling the US border, are the bedroom communities of Abbotsford and Chillwack.

And while real estate is cheaper in the suburbs, Greater Vancouver is firmly locked in the absurd housing bubble that will wreak havoc on our Province when it pops.

Below these communities lies the 49th parallel - the US border. And on the American side, so close to the greatest bubble real estate market in North America, lies Watcom County in Washington State. 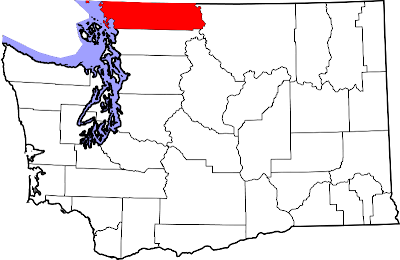 And how is real estate doing less than half the distance immediately south from Vancouver than if you were to travel east to Chilliwack?

It's a completely different world.

While real estate boomed in the lower mainland, the recently released 32nd edition of the Whatcom County Real Estate Research Report tells us that the bedroom community to Vancouver just over the border was well into the "bust" phase of the housing cycle at the end of 2009, with single-family sales down 50% from the peak and single-family permits down 75% from the peak.

And while longer term the county's housing market "will likely benefit from the locational advantages of the region, including an abundance of recreational amenities and its position as a lower-cost alternative to Vancouver and Seattle", right now it is sucking wind.

Meanwhile a few kilometres to the north lies the land of the million dollar single family homes.

Quite the contrast, isn't it?

Yet so many remain in denial about the perilous situation we are sitting in.