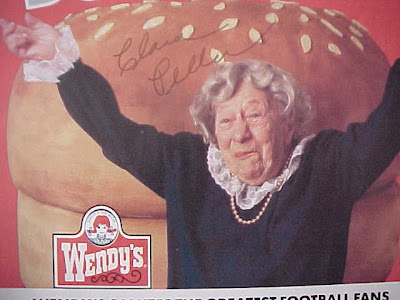 Coordinated media campaigns are always something to behold.

As previously noted, on June 12th we heard about how 'Hot Asian Money' (HAM) was maintaining property value on the west side of the City of Vancouver. Headlining the message was our buddy Cameron Muir from the BC Real Estate Association:

On June 21st the R/E propaganda machine gushed about records being set for sales from 'HAM':

So 'HAM' has created a buying frenzy, snapping up all the luxury properties in fierce bidding wars.

But like the old lady from the vintage Wendy's commercials I'm compelled to ask, "Where's the HAM?"

You've heard of one of the most luxurious and high profile properties in Vancouver, that collection of condos known as the Olympic Village extravaganza on False Creek, are now available for purchase.

On May 17th the newspapers trumpeted that in two days 36 units had been sold, "almost double the number anticipated."

But as VREAA noticed, five weeks have now passed and there are still only 36 units that have sold - and 11 of the pre-sale buyers are now trying to get out of their commitments to purchase.

Last week I profiled the estate at 3639 Osler Street which had languished on the market for almost half a year before the sellers took a 34% haircut on their asking price.

No 'HAM' flavoured bidding war there.

And make no mistake... 'HAM' hasn't lead to a dearth of inventory. Click on this link and you will be taken to a website that lists all the houses for sale on the west side of the City of Vancouver. (Faithful readers from outside BC will enjoy this window into the absolute delusional world of Vancouver's housing bubble)

There are 805 detached houses listed.

Ranked for you in order of price, you will see the list headlines with an abode asking a cool $22 million.

There are 10 properties per page in this inventory layout. If you were to scroll through them looking for something under a mil... you won't find anything until page 72!

That's right, 711 detached houses currently up for sale on the west side of the city of Vancouver that have asking prices of more than $1 million dollars

(and yes... there are even more 'million-dollar-plus, homes for sale on the east side of Vancouver. Add to that even more million dollar condos and apartments).

There had better be one stupendously massive amount of 'HAM' pouring into Vancouver if it is going to support prices in this type of market.

Meanwhile the blog Vancouver Condo Info has also noted the rising real estate inventory. They provide a link to a Vancouver Asian newspaper who have been reporting this fact, presumably to the 'HAM'.

Along with the theme of rising inventory, VCI also took note yesterday of the very high number of price reductions occurring daily in the Vancouver Real Estate market.

Apparently daily price changes are ranging from 162 to 200 reductions. Even with the number of real estate listings in the Greater Vancouver area now nearing 19,000, VCI notes that we’re consistently seeing about 1% of total inventory drop their price every single day.

That means about 5% of all listings in Vancouver are reducing their asking price each week.

Somehow I'm just not buying into all the 'HAM' hype, sorry Cameron.