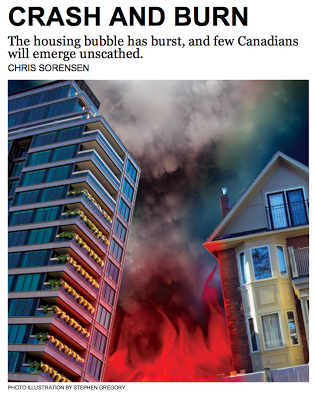 Macleans Magazine is starting out 2013 profiling that many believe 2013 could be the year our real estate bubble faces it's reckoning.

The cover of the magazine is sure to send chills down the spine of any housing owner: 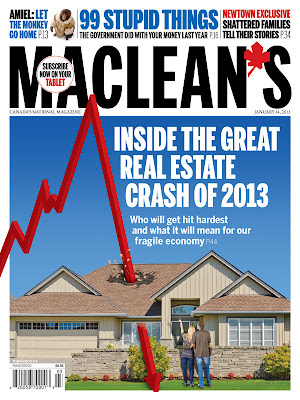 In an article titled Crash and Burn, the magazine lays it all out. Here are some excerpts:

Vancouver home sales [have] crumble(d) to their lowest point in more than decade, with prices falling 3.5 per cent since hitting a high last May. The lesson? Recognizing a looming real estate downturn is more art than science; once it shows up in the numbers, it’s too late to do much about it.


It’s not just Vancouver where realtors’ BlackBerrys no longer buzz. In Toronto condo sales are down by 30 per cent, while prices have fallen by 4.5 per cent. Even the Bank of Canada, which has helped inflate the bubble by tempting Canadians with years of rock-bottom interest rates, has issued a rare warning about the risks posed to the broader housing market of too many condo developers in cities like Toronto and Vancouver chasing too few buyers.

A housing correction—or, possibly, a crash—is no longer coming. It’s here. With few exceptions, the impact will be indiscriminate as the euphoria of rising house prices is replaced by fear. The only question now is how bad things will get. If the decline picks up speed, as many believe it will, there could be a nasty snowball effect. Construction jobs will be lost. Homeowners will end up underwater. Consumers may stop spending. “I’m getting very nervous,” says David Madani, an economist at Capital Economics, who has been predicting a drop in housing prices of up to 25 per cent in Canada. “I know I’m a bear, but the housing market itself has the potential to put us in a recession, let alone what’s happening in Europe and the U.S.”


Canada could be setting itself up for a devastating one-two punch: a painful domestic housing slump just as Canada’s export and resource-driven economy is hit with falling global demand. The most acute threat is the U.S. debt crisis, which, if handled poorly, could tip the world’s largest economy back into recession, taking Canada along with it. Meanwhile, Europe remains mired in a recession and concerns about China’s growth persist. “I feel like Canada is in the path of a perfect storm here,” Madani says. Other than housing, “the key pillar of strength is our booming resource sector,” says Madani. “If you take that away, it’s just going to knock the lights out.”


The sudden cooling in Canada’s housing sector seemingly struck without warning. As recently as last spring, bidding wars were common in many Canadian cities as were the “over asking!” stickers agents slapped on “for sale” signs. The peak may have been reached in March when one Toronto bungalow made headlines after selling for $1.1 million, more than $420,000 above the list price.


Eight months later, the story has been reversed. And not just in Toronto and Vancouver. In Victoria, existing home sales were down by 22 per cent in November from a year earlier. In Montreal, sales were down 19 per cent last month. Ottawa’s sales were down nine per cent and Edmonton’s were down six per cent. With all those houses lingering on the market, prices dipped in 10 of 11 big cities across the country between October and November, according to the Teranet-National Bank index. It was the first such drop since 2009.


The weakness is also evident in new home construction. The Canada Mortgage and Housing Corporation reported a third straight month of falling housing starts in November. The trend is expected to continue next year.


With mortgages as cheap as they’ve ever been (five-year rates can be had for as little as 2.84 per cent) and no spikes in unemployment, there can only be one explanation: Canadians bid home prices up so high, and piled on so much debt, they’ve essentially spooked themselves. In Vancouver, for example, the cost of owning a home eats up more than 80 per cent of an average household’s income, according to the Royal Bank’s affordability index. In Toronto, it’s over 50 per cent. Overall, affordability remains below historical averages across the country, RBC says, with two-storey homes in particular causing “affordability-related stress.”


Some argue this is exactly what the much hoped-for “soft landing” should look like. Earlier this year, Sherry Cooper, the soon-to-be-retired chief economist at Bank of Montreal, likened the Canadian housing market to a balloon—not a bubble—that will deflate slowly and naturally in the absence of a “pin.” But such semantic distinctions gloss over a key feature of bubbles: psychology. “Bubbles inherently contain the seeds of their own undoing,” warns Madani. “They’re driven by overconfidence and expectations that house prices will keep going up. But at some point it just pops.” And that creates the spectre of a pendulum that swings the other way.

The concern is that the market is being driven by speculators, not families. Many condo purchasers buy off a floor plan—often borrowing against an existing property—and then sell or rent their unit once it’s completed several years later (units can also be sold, or “assigned,” to another buyer while a tower is under construction). “So far, the demand for units and supply has not been too far out of balance,” says Ohad Lederer, an analyst at Veritas Investment Research, citing estimates that investors comprise half of the Toronto condo market.

Lederer recently sent secret shoppers to several condo sales presentation offices. They made some disturbing discoveries: sales staff who didn’t ask for mortgage pre-approvals and who grossly misrepresented the demographic trends—namely the number of expected new immigrants to Toronto—that are supposed to keep units in high demand. But Lederer says he is most disturbed by the sector’s “shoddy mathematics.” By his calculations, many condo owners who rent their properties are realizing returns of less than four per cent. If rental rates fall as more units come on the market—Lederer estimates there are at least 5,000 too many condo units being built in downtown Toronto—those same investors will soon be losing money, prompting them to sell. “Being a landlord is already a negative cash proposition at today’s prices,” he says, adding that a bust in the condo sector will likely have a “trickle up” effect by reducing demand for starter homes.


Finance Minister Jim Flaherty decided he had seen enough last July. He dialled back mortgage-amortization periods for government-insured mortgages (required for anyone buying a home with less than a 20 per cent down payment) to 25 years from 30 years, the fourth time he tightened standards in as many years. Observers were quick to note mortgage rules are effectively now back to where they were before the Conservatives took office. A national experiment in lenient lending has finally come to a close.


Even with the market slowing, many experts believe Canada is unlikely to experience a “U.S.-style” housing crash. The riskiest mortgages are guaranteed by taxpayers through the CMHC, thereby insulating the financial sector from the sort of meltdown endured by Wall Street in 2008.

But a mere collapse in home sales—and prices—would be bad enough.

A U.S.-sized housing slowdown could result in the loss of 370,000 jobs and push the unemployment rate well over nine per cent, compared to 7.2 per cent now. And that doesn’t include job losses in related industries.

Equally important is the psychological effect that even a moderate slump in home prices will have on consumers. As people watch their net worth crumble—at least on paper—they are less likely to spend money on everything from new dishwashers to automobiles. “We talk about having a strong housing market because we have a strong economy,” Ben Rabidoux says. “But it’s also true that our economy is strong because we have a strong housing sector.” He estimates that as much as 27 per cent of GDP can be linked to Canada’s housing market, a disproportionately large number compared to other countries, including the U.S. at its peak. “Take it away and that alone puts us into a recession, given where we are,” Rabidoux says.


In such a scenario, the homeowners most at risk are those who are overextended. Of the $570 billion in mortgages that the CMHC insures, about half are borrowers with less than 20 per cent equity in their homes. “If housing lands hard and affects the broader economy, many people will find themselves effectively underwater at a time when they would most need mobility to pursue employment,” Rabidoux says. “In this scenario, a house becomes a prison.” And it’s not necessarily condo buyers or those who paid over a million to live in a hot downtown neighbourhood who are most at risk. Rabidoux says people who shelled out for sprawling “McMansions” in the suburbs could be in particular trouble, as the demand for oversized homes is expected to fall out of favour when baby boomers retire and seek out smaller living spaces closer to the city.

Flaherty is going to have a dilemma on his hands. Falling house prices don’t win votes. And there are already calls from the real estate industry to roll back the most recent mortgage rule changes. But most economists agree a correction is both necessary and long overdue. The average debt-to-income ratio of a Canadian household is now 164 per cent, higher than the pre-crash levels in the U.S. A recent survey by BMO found that one-third of Canadians have cut back on spending to make their mortgage payments. Seventeen per cent dipped into savings.


None of it bodes well for the country’s ability to absorb another economic shock. When the financial crisis hit, Ottawa responded by buying up $69-billion worth of bank-owned mortgages, encouraging financial institutions to keep lending. After a brief dip, the housing sector bounced back and carried the economy on its shoulders. But today consumers are tapped out just as a new round of macro-threats has emerged.

Bay Street is getting nervous. Avery Shenfeld, chief economist at the Canadian Imperial Bank of Commerce, recently warned Ottawa to “be careful what you wish for” when it comes to winding down the housing market. He argued in a report that “a five per cent per year drop in housing prices, for example, would shed roughly a half-point off GDP growth through its wealth effect on consumer spending.” He added: “That makes it even more urgent that the global economy is healthier come 2014, when the full bite of a housing slump on domestic activity will be felt.”

It all amounts to a dramatic reversal of fortune for Canadians, albeit one we brought on ourselves. Back in 2009, our hot housing market acted as a life preserver in a sea of economic uncertainty. Now it feels more like a cinder block tied around our necks.

Macleans says that "with few exceptions, the impact will be indiscriminate as the euphoria of rising house prices is replaced by fear. The only question now is how bad things will get. If the decline picks up speed, as many believe it will, there could be a nasty snowball effect."

The question now is whether that 'fear' leads people to list into the Spring Market in an attempt to bail before it's too late.

It's getting more interesting by the day.

Posted by Whisperer at 1:00 PM