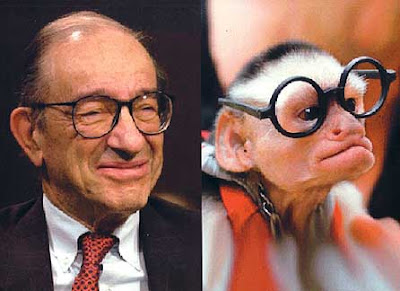 If the impact of looming huge government debt servicing isn't enough to raise your concerns about future huge interest rate hikes, then maybe this will.

Alan Greenspan has finally come out to warn against the other pending threat: government stimulus.

Finance ministers and central bankers from the Group of 20 economies met on Saturday and pledged to maintain policies designed to support economic growth (aka: more fiscal stimulus).

But Greenspan echos what we have been saying here for months... taking away the economic punch bowl in a democracy, particularly during times of high unemployment, can be very, very difficult to do. And with a recovery appearing to start, a continuation of the current policy will only fuel a surge in inflation.

"The US economy may witness double-digit inflation in a few years unless the central bank tightens up its monetary policy," Alan Greenspan warned.

"Unless we roll in this whole degree of expansion, we will be in trouble,” the former chairman of the Federal Reserve told a conference in Mumbai via videoconferencing. “I am not talking 3-5 per cent inflation, I am talking double-digit inflation in the US.”

Greenspan predicted that inflation in the US could begin to pick up sometime in 2012 unless measures were taken to roll back the huge monetary base now.

But on the same day that Greenspan uttered this warning come reports that the job outlook hitting it's worst level ever in the United States.

Further disuading political action to end the stimulus are reports that consumer credit fell by a record $21.6 billion, or 10 percent at an annual rate, to $2.5 trillion. According to a Federal Reserve report released yesterday in Washington credit fell for a sixth month, the longest series of declines since 1991.

Politicians won't want to halt the flooding of cash into the system. It's a toxic mix: huge debt to be financed and looming inflation; a concoction that can only trigger sky-high interest rates for years to come.

And sky-high interest rates - as we have clearly spelled out this week - will devestate the Lower Mainland housing market.

Which, by the way, brings us to another Greenspan quote that is almost tailor-made for Lower Mainland real estate bugs. In a one-year anniversary special on the financial crisis this week, Greenspan told the BBC, "Financial crises are all different, but they have one fundamental source. That is the unquenchable capability of human beings when confronted with long periods of prosperity to presume that it will continue."

Gee Alan, are you questioning the mantra that Real Estate in BC will keep going up, up, up?

Nahhhh, couldn't be. The future looks bright for BC real estate, right?

Maybe we shouldn't be pointing out what appears so obvious.

As one reader said to us in a recent email, perhaps we're being too negative here with our 'whispers'.

Perhaps we should stick our fingers in our ears and chant "la, la, la, la, la" to all the signs we can clearly see around us.

There... doesn't that feel better?

I mean, why prepare for what's coming. The BC and Canadian government's will bail us out if real estate collapses, won't they?

Please read disclaimer at bottom of blog.
Posted by Whisperer at 1:50 AM