Prechter Vs Schiff (Deflation vs Inflation) 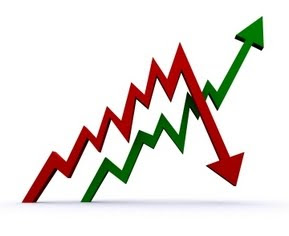 Those of you who visit this site regularly know that we have harped ad nausem on the belief that the economic collapse that took place last year was a deep, economic earthquake... the repercussions of which we are still coming to grips with.

Will the ecomonic collapse and massive fiscal stimulus trigger high inflation and interest rates? Or is the economy in a spiral leading to further deflation and low interest rates for years to come?

In the past this blog has profiled the viewpoints of Bob Prechter and Peter Schiff. One is regarded as the leading deflationist speaker, the other considered the leading inflationist pundit.

Over the last two weeks two different interviews were conducted by Jim Puplava; one with Prechter and one with Schiff. The interviews gave these two a chance to clearly present their views and supporting evidence.

If you are so inclined, click on the links above to listen to the full interviews.

In summary, Prechter's key point is that there is an ocean of unpayable debt which must result in a deflationary collapse and depression (huge unemployment, big hit on the standard of living, etc.).

Schiff agrees that there is an ocean of unpayable debt, but disagrees on what the outcome will be. He expects a dollar collapse and an inflationary depression (huge unemployment, big hit on the standard of living, etc.).

Interestingly there is a lot more agreement between the “deflationists” and the “inflationists” than you would think.

Prechter claims that the creditors will not allow the Federal Reserve to “print its way out of the debt” and that the key evidence for this is that the Fed has tried really hard to keep from doing anything to really, really tick off its creditors.

Schiff claims that the Federal Reserve will keep “printing debt” until the creditors refuse to buy any more and that is when the printing goes into high-gear and there is a currency collapse (dollar plummets) and the inflationary depression really kicks in.

Personally we lean more towards Schiff's take on things.

Schiff claims that the government and Federal Reserve have been printing money and causing inflation non-stop for decades. That's how we ended up in the massive bubble conditions that currently exist (or, in the case of the US, are in the process of bursting). More importantly there's nothing to stop the American government and the Federal Reserve from continuing this process. Schiff cites very powerful reasons for the government to continue including:

Prechter, on the other hand, claims a major shift has taken place in the last year with credit contracting and a major change attitude to avoid debt.

Prechter claims the amount of monetization so far is puny compared to shrinkage in the amount of credit outstanding and that even if all of the bad debt was replaced with 100 dollar bills it would not create inflation because it would just replace what was formally in place.

Schiff's outlook seems to be more based on data and natural reasoning about cause and effect and is more in sync with the experience of the last few decades. Prechter, on the other hand, has been more accurate on what has happened the last 18 months or so. To date Schiff has been wrong in the short-term about the dollar and inflation.

So what can we conclude?

Neither seems to understand why USA creditors (China, Japan, etc) keep buying USA debt and neither has a grip on what will trigger these nations to step back.

Yet this is the key to the current economic situation. Everyone wants to know when and/or if it will change suddenly.

Regrettably there is no clear winner of this controversy right now, although we favour Schiff's outlook.

We are nearing two crucial points that will occur towards the end of this year. They could tell us which way things are going to go.

The second crucial point will come when year over year commodity prices start rising in Q4 (unless there is another crash). The Consumer Price Index (CPI) should stop falling and start rising. These events will probably keep the U.S. Dollar on its downward collapse.

Any significant resumption of CPI rise will prove Schiff right short term. Prechter's outlook doesn't really allow for this, although he gives himself test of requiring all prices to rise to new highs.

At this point we will have a clear picture of whether Inflation or Deflation lies on the horizon.

Of course, both may be wrong and the ocean of debt may be supportable. In that case the North American economy will just muddle through indefinitely, with GDP growth and super low interest rates allowing the USA to work its way out of debt (or at least sustain the debt).

Personally we don't see that happening.

The key to the whole situation is the reaction of USA creditors to the continued piling up of USA debt.

How how long will they just grin and bear it?

Ultimately that is the bottom line.

Personally we can't see any outcome other than that the USA will continue to pile up and monetize debt. Eventually this will lead to a major dollar collapse when times get really, really bad.

How to plan and prepare depends on your assessment of the situation.

We truly do live in interesting times.

Please read disclaimer at bottom of blog.
Posted by Whisperer at 3:20 AM