A Vancouver property assessment not worth the paper it's printed on? 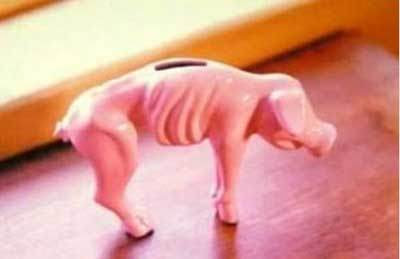 Last week ushered in Vancouver's first entry in the -50% below assessed value club.

And while it technically falls just short of the -50% mark (it's currently listed at -47% below assessed value) you can be sure it will solidly join the club before long... with hundreds of other units quickly following suit.

Believe it or not, the property is located just to the west of the Olympic Village in False Creek. 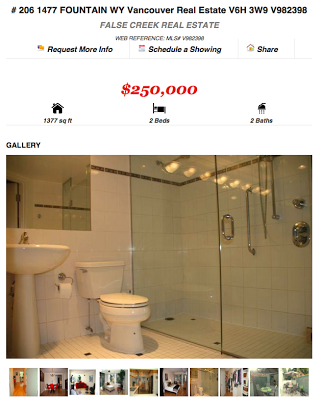 As with all our entries in the -50% club, this property has 'issues'.

#206-1477 Fountain Way is a leasehold property.  And the lease is owned by the City of Vancouver.

In the mid 1970s, housing was constructed along False Creek and leased for 60-year terms. The idea was to rehabilitate what was then contaminated industrial land by utilizing a combination of leased land and co-op housing programs to provide a mix of one-third social, one-third mid-market and one-third full market housing.

By leasing the land, rather than selling it, the city boasted it had achieved affordable housing and retained the land value in the city’s Property Endowment Fund.

And by using densities that were considered high in their day — there isn’t a single family home in the entire area — the city-driven project sparked all the massive changes we now see around the Creek.

In return Condo residents on leased land paid monthly charges to the city that could be raised from time to time to market levels. Residents could also pre-pay a fixed amount for the outstanding term of the lease.

But as the first 30 years came to a close in 2006, and it was time to re-examine the False Creek lease payments, land values in Vancouver increased far beyond what had been anticipated when the formulas were originally established.

But this was 2006, soon after Millennium had paid top dollar for the Olympic Village land nearby.  '

Market levels' were about to be massively distorted by the highest amount ever paid for land in the city to that time.

The 5,000 residents of the S.W. False Creek community plan - those who had  "built a strong, successful, sustainable community" - were about to suffered massive collateral damage from the Olympic Village land purchase.   In 2006 the newspaper, 24 hours, wrote:

"Richard Cooper woke yesterday to find his payments had jumped from $102 monthly to $785.

“I got up this morning and there was a bulletin,” Cooper told 24 hours.


Condo owner George Stratis was among the hardest hit. He wasn’t aware of the increase until he was contacted by 24 hours yesterday. “You’ve got to be kidding me! That’s absurd,” Stratis said, when told his payments had jumped by $1,400 a month. “That’s larger than a mortgage.”


Stratis could now owe the city about $20,000 a year. That’s on top of his regular property taxes.”


One owner has seen their payments raise from $121.50 to $2,000 – An incredible SIXTEEN HUNDRED PERCENT increase! The city claims that these lease rates have been stuck at a low value for thirty years and that todays increase reflects the current value of the land. Leasehold value has been a contentious issue between residents of False Creek and the city of Vancouver for years. Some residents claim this former industrial land is contaminated and overvalued by as much as 40-50 per cent.


“They’re simply boldly making the statement saying this land is worth top dollar and we should be getting as much rent for it as if it were clean,” said Renger, a senior city planner in another jurisdiction. “That’s not what market land value is about.”

As Director of Real Estate Services, Michael Flanigan, noted in a June 26, 2007 administrative report to city council, “Some leaseholders simply did not have the financial ability to prepay their leases on top of paying monthly mortgage debt, taxes, strata fees, ground rent, and special assessments.”

Ultimately the City agreed to go arbitration and to allow one more prepayment option. The end result were lease payments on a scale of $900 per month instead of an average increase of $1,200 per month.

And while the initial conflict over the lease increases has been resolved the damage has been done.

In a prophetic comment made earlier this summer Neil Hamilton, Senior Property Advisor with MacDonald Realty, identified the looming catastrophe which was clear to all to see:

“The thing you have to remember is, when you go into a lease, no matter how it’s set up, you have to know how long is left in it. Because once it gets under 10 years, and certainly under 5 years, the property is going to be much less saleable than one that has, say, 35 or 40 left on it. Because, at the end of that lease, nobody knows what’s going to happen to it. It’s like a game of musical chairs—or, in this case, musical buildings. When the music stops playing, you don’t want to be the person left holding the bag."

Hamilton, however, was overly optimistic. In the summer he predicted residents would have to wait until the lease gets under 10 years (which is 15 years from now) before they are left holding the bag.

But with 25 years left in those leases, it's already happening.

In our collapsing housing bubble, leaseholders are now clearly holding that proverbial bag. And it's happening 15 years before local real estate agents predicted it would occur.

They're finding out - a little earlier than everyone else - that their 2011/2012 government property assessments aren't worth the paper their written on.

So there you have it.  2012 is topped off by ending with -50% below assessed value real estate listings  entering the City proper.

Who would have thunk it?


Please read disclaimer at bottom of blog.
Posted by Whisperer at 2:01 AM