What lies ahead? One local real estate agent calls the bottom. 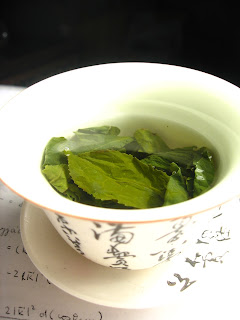 As the news about November's real estate sales circulates in the media, the main emphasis shifts from declining sales to actual prices.

The mantra being pushed is that prices aren't (and won't) be coming down.  We saw that message on November 30th:

"If you've been staying out of the housing market, waiting for a big drop, you might be in for a long wait."

And it's been a theme Tsur Somerville has pushed since early October.

Yesterday it was Eugene Klein, president of the Real Estate Board of Greater Vancouver (REBGV):

November home sales in the Vancouver area fell 28.6 per cent compared with a year ago as what was once the country's hottest real estate market continued to cool.


Despite the sharp drop in sales, the board said the MLS home price index composite benchmark for homes Greater Vancouver was $596,900, down just 1.7 per cent compared with a year ago. The index peaked in May at $625,100.

"Home sellers appear more inclined to remove their properties from the market today rather than lower prices to sell their properties," said Eugen Klein, president of the Real Estate Board of Greater Vancouver.

At this stage of the process, it's no surprise that listings are being pulled to wait out conditions.  And it isn't really surprising that the real estate industry is focusing on the convoluted HPI to dampen the impact of any price drop.

For while the HPI is only down 1.7%, the average detached home price is now down 14% from the February 2012 peak.  Who wants that figure prominently publicized?

Conditions are mimicking what we saw in 2008 when the Financial Crisis started.  As Garth Turner noted, the parallels are eerily similar. 2008 saw a huge drop in sales and the average price started to plummet: 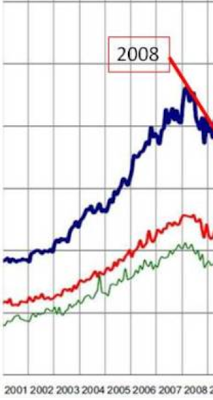 Of course the collapse was resuscitated. "In 2008 a variable-rate mortgage was 6% and a five-year loan was 5.75%. The world fell into a financial... and the Bank of Canada rushed in emergency interest rates. By May of 2009 a VRM had collapsed to just 2.25% – the lowest point in history. With rates almost 4% lower than they’d been months earlier, and mortgage payments slashed by more than half, the collapse in real estate prices and sales was quickly reversed"

The efforts were complimented by the federal government's bailout of the banks through the Insured Mortgage Purchase Program (IMPP).

Not only was the collapse halted, but the bubble blew even higher as Canadians plunged themselves into historic levels of debt: 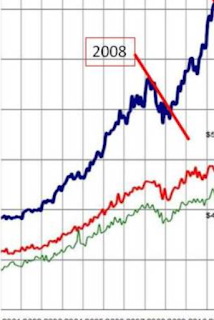 But as the crack cocaine of cheap easy money has run it's course and the government has started to pull back on those emergency measures, the slide is happening again (despite the HPI only dropping 1.7%): 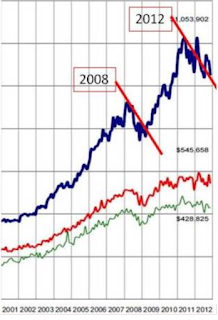 So as the average price mimics 2008, what divine intervention will occur to see that prices only 'flatline'?

What is going to cause prices to resume their upward trajectory?

The changes to the mortgage rules have frozen out the entry level buyer, the ones who used to be balt o to get into the market with nothing down.

Without their business the market freezes, as Thomas Neal of Royal LePage Estate Realty noted in the Globe and Mail:

While people are still coveting single-family houses, those move-up buyers who already own a condo are more hesitant to purchase a house because they don’t know how long it will take to sell the condo. That’s a change from the dynamic of the last eight years or so when condo owners would often list the unit first, reap more than they expected in a bidding contest, and then in turn funnel that money into winning the competition for a house.

“Now they’re not buying first; they’re selling first,” says Mr. Neal. With that shift, he explains, the number of buyers out there is cut roughly in half.

Enter the current industry campaign: "buy now because prices won't be going down."

I have a feeling this theme is going to ramp up over the winter months before the Spring re-listing begins in earnest:

It’s a market that’s winding down in the dwindling days of November. Few new listings will arrive on the market in December. Those sellers who do list now have likely already purchased another property.

“If you don’t have to sell I think you’re going to wait until the spring,” says Mr. Neal.

As for those sellers whose condos and houses are already lingering on the market, Mr. Neal predicts many of those people will be taking down the “for sale” sign by Christmas.

“People who don’t sell in December will be back out on the market in February,” he says.

And when they come back in Spring, they want to hear that there will be people to buy their homes.

Perhaps that's why some bearish agents are starting to change their tune about market conditions.  Let's face it, who wants to list with an agent who tells you it's only going to get worse.

Perhaps this explains the about-face in attitude from real estate agent Andrew Hasman.

In 2011, when prices were going crazy on the west side, he was calling the market 'unhealthy' and warning about the consequences:

"The local person is completely out of this market," he said. While skyrocketing prices have made business good, Hasman said that the current market, with housing prices rising 10-15 per cent each year, is unhealthy.

"Anytime you have extremes in markets, it's never healthy," he said. "You end up with a bubble. If the local economic base can't support these levels, then at some point you're going to have a lot of people burned big time. It's not sustainable."

This feels like the first Normal Real Estate market in many years. That is if you can even define or remember what 'Normal' really feels like.  Gone are the bidding wars and gone (for now) are the days when homes were selling in mere days. For buyers there is now good selection and no pressure to make that big commitment... Sales of homes across the Greater area of Vancouver are at levels not seen since 2000!

Overall, prices still seem to be holding with some price softening in specific markets only. Vancouver’s Westside looks to be one of those markets.  Fewer buyers from China, tougher mortgage regulations and concerns over the global economy are all weighing on consumer confidence. I predict these market conditions will continue through the balance of 2012 with further price softening.

So does Hasman see more dismal times ahead for when all those disgrunted sellers re-list in the Spring?  Apparently not, according to his December 4th market report:

We continued to slow sluggish sales activity on the Westside during November. That being said there is some promising news. The number of homes on the market at the end of November has dropped substantially since peaking in mid-September. I have also noticed a lot more calls on our listed properties combining with more viewings too. Even though sales volumes continue to remain well below last year’s levels, the shrinking supply and stable sales volume over the past 6 months points to a stable market moving forward. In fact, I’m going to go out on a limb and predict a robust Winter Market with brisk activity in January and February.

Really? And what are we going to hang our hopes on for this resurgence in the market?

For home owners thinking about selling in 2013, keep in mind if you list your home in March (based on the last 4 years of sales activity) you missed the best time for selling. Home owners that listed their homes just before Chinese New Year achieved the highest selling prices. The period of Late January to end of the February was the busiest time for housing sales the last 4 years. Why should this year be any different?

Ummm... because that period in 2012 also wasn't like the years before it?  Based on 2012, that period was a disaster. Are we really going to continue to hang out hats on Hot Asian Money (HAM) again this Spring?

It appears so. Hasman not only pins his clients hopes on HAM, he goes further than that and calls a bottom for the market:

I do not see any housing crash or even much more downside to house prices. Prices have already slipped 10-15% in some cases and I feel that is as far as it will go.

So there you have it: Buy now, because prices aren't going to go down.

Pardon me if I read the tea leaves a little differently.


Please read disclaimer at bottom of blog.
Posted by Whisperer at 2:35 PM