"The price increases of the last decade are long gone."

You've got to wonder just how significant the shifting mindset amongst the public is regarding real estate when even Global TV is now openly saying the following:

"... there hasn't been a crash, thankfully, but Ottawa and the Bank of Canada are desperate to raise interest rates once the economy improves. Economists are expecting the rates to start inching upwards by late 2014 - meaning the price increases of the last decade are long gone."

Kinda kills the whole campaign to get people to buy the current dip, doesn't it?

Of course the same talking heads who want you to buy the current dip also want to insist there is no dip - prices are just flat and will remain flat (real estate never goes down, don't you know?).

Meanwhile Cameron Muir wants you to know that:


Last year’s figures must be taken “with a grain of salt,” Muir said because the prices were inflated by a large number of luxury homes for sale in West Vancouver, Richmond and Vancouver’s West End.

In all the breathless monthly reports we saw last year from the BCREA, does anyone recall being told to take those figures with "a grain of salt?"

Muir also wants you to know that:


"The federal government’s decision to reduce the maximum amortization period for a government-insured mortgage to 25 years from 30 years also affected home sales.

That no doubt has squeezed some potential buyers out of the market."

So buyers are extending themselves so thin that an extra $160 a month collapsed the real estate market?

If so, imagine what a few interest rate points might do?

(hat tip to LM and GreenhornRET)

On another note, isn't the world supposed to end tomorrow? 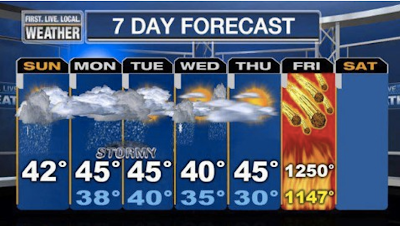 
Please read disclaimer at bottom of blog.
Posted by Whisperer at 11:56 PM