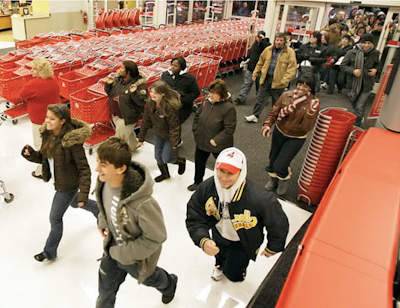 Ahh... Boxing Day evening.
Every year, for your faithful scribe, the pre-Christmas rush gives way to the post-Christmas wind-down.
Not being too enamoured with frenzy of the Boxing Week sales, this period between Christmas and New Year's is leisure time for me.
But news stories today are filled with reports of the post-Christmas commercial frenzy... and with the tremendous success of those sales.
Christmas and Hanukkah celebrations represent more than one-third of annual sales for retailers. It is the reason why we are bombarded with relentless advertisements for all that glitters from Halloween until New Year's.
And it has grown.

In what seems like a horrendous, natural progression, the ad blitz seemed to pass right through Christmas this year.

The fanaticism and fervor of this year’s Black Friday did not disappoint. There was hair tugging at the Wii U display in Target, a shooting outside of Wal-Mart and long lines as consumers nationwide waited to bust down the doors the day after Thanksgiving.
But while Black Friday did not disappoint, the even bigger success story here is that of Cyber Monday’s explosive sales growth in light of a quickly evolving retail landscape. This analysis puts together the numbers behind both major sales dates, comparing traditional versus online shopping, to find 3 key takeaways:

But was it as successful as first reported?
Seems the holiday shopping season was actually a huge bust as the Globe and Mail reports that U.S. retailers recorded the worst holiday season since 2008.

The 2012 holiday season may have been the worst for retailers since the financial crisis, with sales growth far below expectations, forcing many to offer massive post-Christmas discounts in hopes of shedding excess inventory.

It's almost as if the media regurgitates retail hype in hopes of building consumer confidence to encourage economic spending.
Sound familiar?
It's the exact complaint many bearish blogs have about the cosy relationship between media and the real estate industry.
You almost expect some PR rep or economist working for the local Chamber of Commerce to come out and correct those negative news stories with an analysis that says: "sales aren't below expectations... they're just flatlining."
In Canada, our Black Friday is the Boxing Day sale.

As we watch the news tonight about the huge the success experienced by cramped stores across the nation today... I wonder what retail reports several weeks from now will tell us?


Please read disclaimer at bottom of blog.
Posted by Whisperer at 5:53 PM