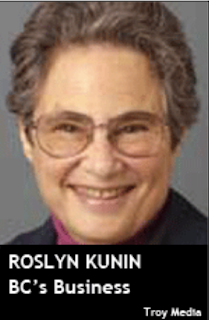 Making the rounds this morning is an article she wrote which appeared in Troy Media titled "Little chance of correction in Vancouver real estate." (hat tip Many Franks)

Kunin stresses that when she says ‘Vancouver’ she means the greater Vancouver area, sometimes referred to as Metro. She also adds that she defines a crash as "a large and sudden price decline where prices do not recover to previous levels in the short to medium term." Noting that housing prices did crash in the 1980’s, a major difference then was that at that time many homes had been bought by speculators on very small margins and interest rates soared well into double digit levels.

Of course it's different this time around.  Here are excerpts from her argument of why we won't crash:

[Today] very few homes are held on spec and any anticipated increase in interest rates is expected to be very modest. Mortgage rates may even go down. Canadian banks make a significant share of their profits from mortgage lending and it is a low risk part of their business since their prudent lending standards reduce the chance of default. Also, many mortgages are guaranteed by the Canadian Mortgage and Housing Corporation (CMHC).

The cost of housing in Vancouver is not likely to change dramatically for the foreseeable future.

February sales in Greater Vancouver and the Fraser Valley are still below trend, but are higher than they were in January and attendance at open houses has been rising. The housing industry has been expressing optimism about housing sales and prices.

Retirement age baby boomers across Canada hope to spend their golden years in this small corner of Canada where you don’t have to shovel snow... They [are] one of the main reasons why a housing crash will not occur. Any drop in prices will lead to retirees entering the Vancouver housing market, putting a floor under prices.


Those in the international community do not seem to mind our house price levels. When looked at in a global context, home prices in Vancouver are not unreasonable. Ask anyone from London or Hong Kong. And people from around the world see not only good value in our real estate, but also an open society, a pleasant climate and a stable political environment.


Finally, the majority of people in greater Vancouver already own real estate, benefit from current housing values and would be hurt by a crash or any serious drop. They do not want to see the value of their biggest asset decline. Home equity often forms a large part of retirement savings and people count on it in their financial planning.

The assumption in her last paragraph is that the majority of people in Vancouver won't sell their homes for below market value. You can click the link above for the full article.

I wonder if Ms. Kunin has ever heard of David Lereah, chief economist of the US National Association of Realtors.

in 2005, 2006, 2007 and through most of 2008 when bubble watchers were warning of the dangers of the blowing housing bubble, Lereah was there to counter each argument and calm the masses.

In this March 1, 2007 article on CNN titled Mr. Real Estate: 'All systems go, pockets of pain', Lereah discounts any chance of a housing crash:

Even though the market contracted, 2006 still didn't bring the first yearly price drop since the National Association of Realtors started tracking the statistic in 1968.

Leerah: Nope. It's amazing isn't it? People thought we'd get it because they thought the bubble was going to burst, but it never happened.

Lereah: I don't because we're already seeing some parts of the real estate market picking up again. It looks like we've bottomed out. The worst was the fourth quarter of 2006.

For the past two months now the inventory numbers actually improved for the country. Mortgage rates are still low. The Fed is going to behave. So there are a lot of good signs that the worst is over for housing.

So when it's all said and done, this contraction in housing is probably going to be the least severe contraction we've ever had, which is going to surprise a lot of people.

But many think we still have a long way to go.

Lereah: If you look at local areas, that statement is true. California has a long way to go. I expect them to continue to experience pain all throughout this year. Southern Florida, same thing. Las Vegas is probably going to take a little longer to correct as well.


A quarter of the country is still feeling pain, and I can't guarantee that it's going to be over by the end of 2007 for some of those areas.

So they could decline into 2008 or longer?

They could. It's hard to tell right now. The real key for some of these areas that are having problems is prices. Prices need to come down to bring buyers back to the market. And until they do, they're going to experience drops in sales. California is experiencing some serious drops in sales - 30% drops in some places.


So when we talk about real estate are you talking about local or national?

Lereah: If you're talking about national, I think we've bottomed out, and it looks like we're going to come back very modestly throughout this year. And then in 2008, it will be back off to the races again in my opinion. But for a quarter of the country, that's not the case.


So you don't think California and Florida could bring the whole country down?

Lereah: They'll bring themselves down. But will it bring the whole country down? No. The real key here is the economy. The difference between the contraction today and any other contraction we've ever had is that the economy is healthy.


But Robert Shiller, author of "Irrational Exuberance," says we might have gotten so far out of whack that it has to come down no matter what.

What surprised you about the boom?


I never anticipated that type of market share in second home buying. That proved to be the end of the boom.

Somehow I don't find Ms. Kunin's argument all that comforting.


Please read disclaimer at bottom of blog.
Posted by Whisperer at 11:40 AM