What does "Sold Out" mean? Is it another way the public is being manipulated in the world of real estate sales? 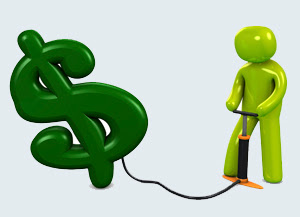 UPDATE: The marketing firm for Three Harbour Green has responded to today's post.  You can see their response here.

The investment world calls it the pump and dump.

It's a stock selling tactic that involves artificially inflating the price of an owned stock through false and misleading positive statements in order to sell the cheaply purchased stock at a higher price. Once the hype kicks in, the stock is "dumped".

Critics of the real estate industry have often wondered aloud about the term 'Sold Out' when it's applied to condo developments.

Is it sometimes used as a 'pump and dump' tactic?

What does "Sold Out" really mean?

Ask the average Joe/Josephine potential buyer on the street what they think when they read that a 100 unit development is "Sold Out", and she probably believes it means all the units in a development have been sold to like-minded purchasers.

Once "Sold Out",  the cachet of the property increases with implied high demand.

But what if that property isn't really "Sold-Out"?

What if a theoretical developer, in the face of lagging sales, holds on to over 40% of the units in a development in order to create scarcity in the marketplace?

Sure... all of the units made available for sale have been sold. But if the public knew a developer was holding on to almost half the units in his building for sale at a later date, would keeping that information from them constitute... deception?

Ponder that while we add another dimension.

What if the aforementioned theoretical developer then begins selling his withheld units, one at at time. and as part of the marketing of those units he advertises that all other units in the development are 'Sold Out'?

Would potential buyers pay more than they would have if they had known almost half the units in a development were still held by the developer waiting to be sold?

Last Saturday the following advertisement appeared on page B4 of the Vancouver Sun. 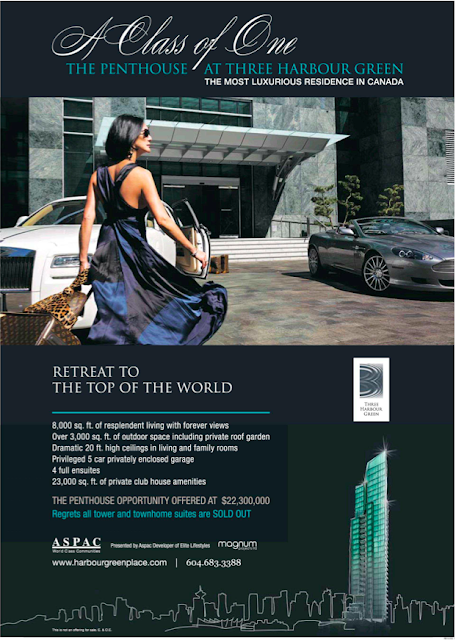 Three Harbour Green has announced that the Penthouse in their building is available for $22,300,000.

Three Harbour Green is a Coal Harbour neighborhood development with 81 suites on 32 levels.

But is that really the case?

A anonymous reader of this blog sent us what appear to be current tax reports (dated February 26th, 2013) for properties at Three Harbour Green (277 Thurlow Street).

This is a screen shot of an alleged tax report for Unit # 3101.  It's the report for the Penthouse suite - supposedly the only unit left available for sale: 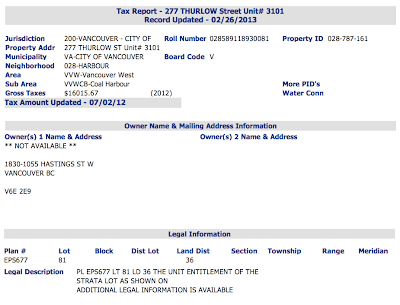 As of February 26th, 2013 it says the unit is registered to 1830-1055 Hastings Street, the address of the developer of Three Harbour Green: ASPAC Developments Ltd.

That would make sense since Three Harbour Green is advertising the property for sale.

These alleged tax reports appear to indicate that the above listed 34 suites (of the total 81 suites at Three Harbour Green) continue to be registered to the address of the developer, ASPAC Developments Ltd.

Here is one of those tax reports, allegedly for Unit #102: 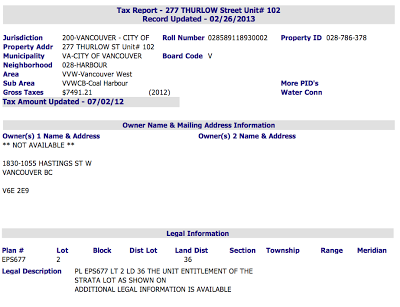 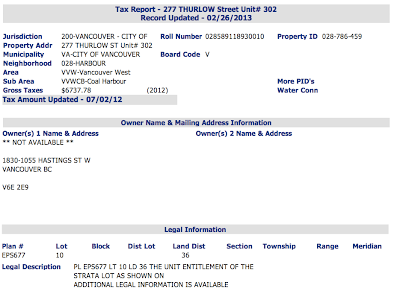 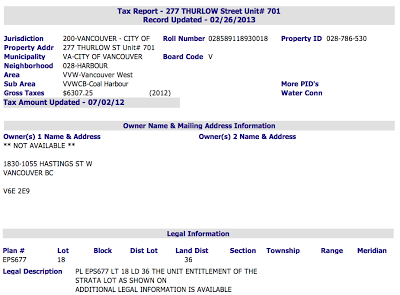 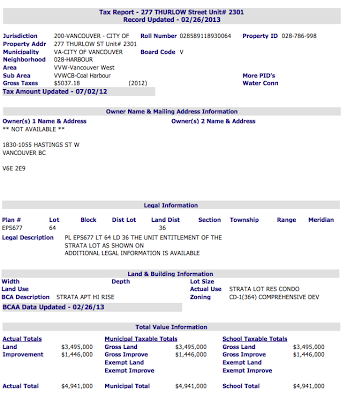 They all appear to be registered to 1830-1055 Hastings Street - the address of the developer of Three Harbour Green: ASPAC Developments Ltd.

How can this be if "all tower and townhome suites are SOLD OUT"?

I guess it's possible that these tax reports we've anonymously received are fake.

Or, perhaps, Chinese New Year (CNY) did produced a wave of sales and all 33 remaining units (everything except the Penthouse) were sold; the February 26th tax reports merely waiting to be updated with the new registered owners.

But didn't we cover the whole disappointing CNY sales season after the MAC Marketing fiasco?

So here's our question.

Does Three Harbour Green and ASPAC Developments Ltd still own all of these suites?

If these tax reports are genuine (and CNY didn't produce a wave of sales that swept away all the inventory at Three Harbour Green), is advertising the development as "Sold Out" with "regrets all tower and townhome suites are SOLD OUT" misleading?

Surely there are some kind of standards in the real estate industry for this sort of thing?