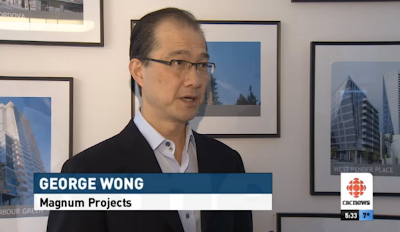 Mr. Wong works for Magnum Projects.  From his profile:

A recognized leader in the marketing and sales of condominium projects, George Wong is renowned for his ability to create effective and efficient sales and marketing programs that speak directly to an identified target audience, resulting in high-velocity absorption and an increased return on marketing investment.

You may recognize his picture from last month's CBC-TV story exposing the MAC Marketing employees who posed as fake Asian buyers for the media during Chinese New Year.

In that story, Mr Wong had this exchange with the CBC:

CBC Reporter Kirk Williams: Some say irrevocable damage has been done to the Real Estate Marketing Industry. That future claims of sold out success stories will be viewed with skepticism, at best.

George Wong: I hope that is an isolated incident. Unfortunately it does give the Industry a bit of a black eye.

Perhaps it is that skepticism which lead to our post two days ago about Three Harbour Green titled "What does "Sold Out" mean? Is it another way the public is being manipulated in the world of real estate sales?"

Our post questioned the validity of a real estate ad in the Vancouver Sun in which Three Harbour Green announced that the Penthouse in their building is available for $22,300,000.

Our concern? The part of their ad that told potential buyers that: "all tower and townhome suites are SOLD OUT"

Our skepticism was generated by current tax reports which show 34 of the total 81 suites at Three Harbour Green registered to the address of the developer, ASPAC Developments Ltd.  The validity of these tax reports was reinforced by this November 26th, 2012 article in the Vancouver Sun which advised that approximately 30% of the 81 suites at Three Harbour Green remained unsold.

Given that this project started construction in 2008, and that the Lower Mainland has been beset by stunningly weak real estate sales the past three months, we wondered if it was realistic to believe that all the tower and townhome suites at Three Harbour Green have in fact sold out... particularly since it had taken approximately 5 years to sell just 60-70% of the development.

As it turns out the above mentioned Magnum Projects is the marketing and sales firm for Three Harbour Green.

Yesterday we were contacted by Mr. Wong, who wished to address the questions we had raised.  Here is what he had to say:


Your recent blog post titled “What does "Sold Out" mean? Is it another way the public is being manipulated in the world of real estate sales?” has been brought to our attention, and we wanted to provide you with the most updated information in regards to Three Harbour Green.


As the marketing and sales firm for this project, we would like to confirm that all of the homes at Three Harbour Green have been sold, with the exception of the penthouse, as the Vancouver Sun ad states.


“Sold” means a firm and binding contract with received deposit.


The majority of the Three Harbour Green homes have already closed. The remaining units are in the process of closing, which means we've received firm contracts and deposits. Units which are sold, but not yet closed, have not yet registered with the Land Title Office, which is why the tax records posted reflect the current owner, Aspac Development.


We would hope you can make an addition to your story that includes our statement and clarifies the issues. Please feel free to contact me if you have any questions.

While the real estate market has been weak for the rest of the Lower Mainland, Magnum Projects has been able to defy the trend.  Since the Vancouver Sun reported on November 26th, 2012 that more than 30% of the units at Three Harbour Green were unsold, Magnum states unequivocally that the development is now officially sold out (excepting the penthouse, of course).

We thank Mr. Wong, and Magnum Projects, for taking the time to address the issue for us.


Please read disclaimer at bottom of blog.
Posted by Whisperer at 8:59 AM