Newsvertising 2: Are there other sections of the Vancouver Sun/Province that are nothing more than real estate advertising dressed up as news? 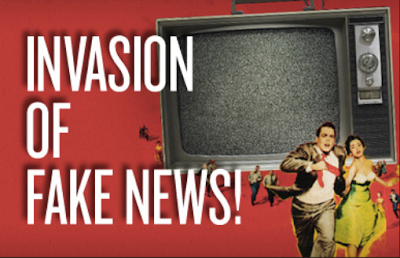 Yesterday we introduced you to the topic of 'Newsvertising',  a disturbing trend wherin our City's major daily newspapers publish paid advertisements dressed up as legitimate news stories; executed in a way that doesn't clearly tell you that what you are reading isn't news.

You pay them and they make it look like news.

It's a disturbing journalistic development, especially when leveraged by a real estate industry desperate to 'massage' rapidly falling consumer confidence; confidence which we are now told is dropping faster than ever before.

It begs the question: what other news sections in the Sun/Province portfolio are the editors prepared to journalistically pimp out?

Did you happen to catch two more of those real estate Gallery portfolio's that the Vancouver Sun ran over the past week? You know... like the one that profiled the infamous fake mansion in West Vancouver.

There was this one on March 21st which compared what you could buy in Vancouver vs. Roswell, Georgia. 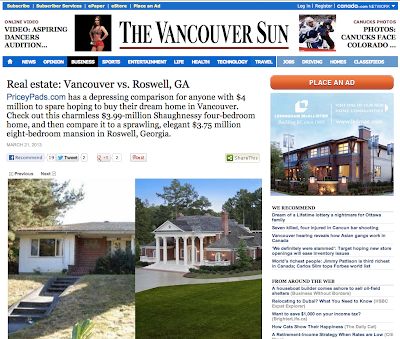 And then,  on March 25th, the Sun ran another comparing what you could buy in Vancouver with Beverly Hills, California. 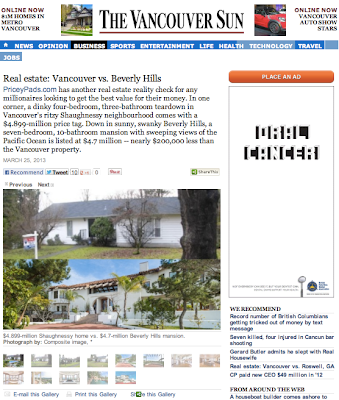 In each of these cutsie infotainment-style news pieces the Vancouver Sun gave credit to the originating source, a luxury real estate blog called PriceyPads.com

Faithful readers probably recognized the comparative style format at play from local blog The Thirties Grind. That's where writer Melissa Carr has spent the last year cranking out real estate comparisons in a feature titled the Absurd Vancouver Property of the Week.

Carr has been earning a certain level of notoriety as Global TV and CKNW radio have taken to regularly inviting her on-air to discuss the insanity.

Pricey Pads (PP) has a strong local Vancouver presence and bills itself as a "luxury real estate" blog.  Run by Mitch Cal, he says:

Pricey Pads was created as a way to showcase the greatest Estates and Mansions around the world. It continues it’s goal to compile updated lists of the world’s most expensive luxury Real Estate and Rentals in todays market. Keep checking back for frequent updates and new and exciting features! Be sure to “Become a Fan” of Pricey Pads Facebook Fan Page to see much more content. 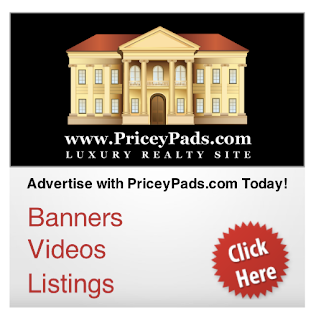 Cal even boasts that PP has "worked with the Auctioneers auctioning Sheryl Crow’s Estate on an advertising campaign and have been involved with a number of Realtors from Canada, Brasil and the United States to help market their properties."

One thing PP doesn't regularly do, however, is profile Vancouver properties in a value-vs-value format with other North American cities. From what we can see, this is something new for them.

Incredibly this hasn't deterred Pricey Pads from achieving an astonishing level of success in garnering media attention with their new concept. One can only marvel at the speed in which they were able to gain major newspaper coverage not once, but twice in the same week with their new feature.

It took Melissa Carr and The Thirties Grind over a year to crack Vancouver's major media and gain exposure.

PP seems to have pulled it off in less than a day.

You see, PP published their Vancouver vs. Roswell, Georgia comparison on their website on March 21st. Later that same day it appeared in the Vancouver Sun.

Presumably some sharp, eagle-eyed editor just happened upon the Pricey Pad piece the moment it was posted and said, "wow... we need to pick up on this and print it in our newspaper. Our readers would find this very interesting!"

Suddenly the Sun has their latest real estate oriented human interest story for us and Pricey Pads benefits from unexpected media attention to their website link in the Vancouver papers locally, and nationally as the gallery feature syndicates across the country.

You don't suppose Pricey Pads paid the Vancouver Sun to feature them in their little infotainment Gallery, do you?

How can this be though?... There's no indication that what we are looking at is a paid real estate advertising feature. No indication that the Sun is actually running a promotion to drive web traffic to a for-profit website.

It's the formula by which a once respected news organization sells it's journalistic integrity and soul in a misguided attempt to financially survive.

Based on what we have shown you the last two days, how can you trust the actual motive/source behind anything printed about real estate from an organization employing this formula?

Posted by Whisperer at 6:30 AM