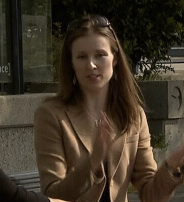 Meet Janet MacKenzie.
She's the condo buyer we told you about yesterday who made an offer on a Yaletown property that was listed with a reduced realtor's commission.
Her realtor, Marco Vincenzi, tried to make a deal behind her back that would compensate him for the money he stood to lose on that reduced commission. To accomplish this, he forged documents on MacKenzie's behalf that resulted in direct financial gain for himself.
When MacKenzie was made aware of what he was doing, she went to Vincenzi's real estate office in Coquitlam and demanded a meeting with his boss, Jason Watson. Watson insisted in a recorded conversation that Vincenzi’s days as a realtor were done.

"Ultimately by the end of the day, I can't say it will be tomorrow, but probably by Monday he won't have a license," said Jason Watson, managing broker at Sutton Group – West Coast Realty."

But rather than see MacKenzie take her concerns about Vincenzi to police for formal charges, CTV-BC reports that Janet Watson, the managing broker at Sutton Group - West Coast Realty, told MacKenzie not to call police.
Instead MacKenzie was urged to allow the Real Estate Council of BC (RECBC) to handle the matter. CTV-BC reports Mackenzie was assured the RECBC would see that Vincenzi would lose his license permanently.
In a ruling that surprises no one who follows this blog though, the RECBC didn't revoke Vincenzi's real estate license.

Vincenzi was found to have committed professional misconduct. The RECBC ordered him to pay $1,250, take a remedial course and gave him a measly 120 day suspension.
Vincenzi's explanations for his actions?

Vincenzi told the Real Estate Council he was in the running for a platinum award given to realtors who secure $100,000 in commissions for the year. The council's ruling says, "at the time of the transaction he had earned approximately $90,000 and he states that there was a lot of pressure of him to put him over the $100,000 threshold."

Vincenzi also told the council he was facing "a great deal of financial pressure" because of his upcoming wedding.

So Vincenzi claims he forged his client's documents because he's publicity hungry for a realtor award. There's also the small matter that hes desperate for cash to pay for a upcoming wedding... and this is justification not to ban him from selling real estate forever?
Says MacKenzie:

"The idea of saying, ‘well, because I was under financial pressure, that's okay, somehow makes this okay,’ it doesn't. It's not acceptable. Knowing right from wrong is kind of a basic principle."

No kidding.
It's the same basic principle that doesn't excuse one from going on TV to lie to about Asian buyers  during Chinese New Year.
These are the actions of a few that tarnish and destroy the reputations of an entire industry.  Why is the RECBC even tolerating this behaviour?
What rankles even more is that Vincenzi's suspension doesn’t kick in until June and it appears the Metro Vancouver realtor is still in business, accepting calls on a current listing from a CTV intern posing as a potential customer.
CTV-BC consumer reporter Lynda Steele went to Sutton Realty in Coquitlam to see what Vincenzi's boss, Jason Watson, had to say about his employee's professional misconduct, but she was told Watson was in a meeting and not available.
It reminds us of the liars from the MAC Marketing Solutions scandal who are still out selling real estate while under investigation for their transgressions. Does the RECBC not appreciate the optics of their inaction?
CTV-BC says they are airing a third part to this story tomorrow.
For the sake of the public at large, and the industry as a whole, let's hope they continue to pursue this issue.
==================


Please read disclaimer at bottom of blog.
Posted by Whisperer at 9:24 PM