Wed Post #2: Is this an activity which constitutes campaigning outside a polling station? 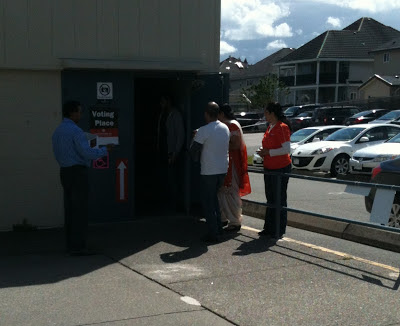 Above is a picture of the entrance to a polling station in Surrey. It's Sanford Elementary School to be precise, located in the  Surrey-Newton riding - a seat currently held by Harry Bains of the BC NDP.

At the far right of the picture is a woman wearing an orange/blue golf shirt.  It is apparently embroidered with the BC NDP logo  and says "BC NDP 2013"

According to GJ, she is a volunteer driver for the Bains campaign and has given a Bains voter a ride to the polling station.

Given the generic nature of the golf shirts (BC NDP 2013), is this being repeated at every voting station in the Province by volunteers for the BC NDP (or other parties)? Is this allowed or is it a violation of the voting act?"

Interesting question and I'm not sure of the answer. Are volunteers allowed to wear party logos and stand outside of voting stations? Are all the political parties doing this?

Anyone out there know?

UPDATE: Reader in comments section (hat tip Jesse) confirms this action is a violation of BC Election rules.


Please read disclaimer at bottom of blog.
Posted by Whisperer at 1:21 PM

Email ThisBlogThis!Share to TwitterShare to FacebookShare to Pinterest
Labels: BC Election 2013, voting violation