Last night CBC-TV ran a story which shows the danger of condo pre-sales when they profiled the story of a man who signed a pre-sale contract for a luxury condo in Vancouver and has now lost almost three quarters of a million dollars after he failed to complete the final sale on the unit.
Lawrence Austin signed a deal to buy the condo at 1499 West Pender in the spring of 2008, just months before the global financial crash.
Austin agreed to pay Reliance Properties $2.71 million for the 25th floor Coal Harbour condo, and put down a 10% deposit of $271,000.
But within a few months the global real estate market had crashed and Austin began looking at his options to get out of the deal.
Initially, he argued that at the time of the sale he had made an oral agreement to be able to assign the pre-sale agreement to another buyer, regardless of price.
But the developer told him his pre-sale agreement restricted him from assigning it to another buyer for less than the purchase price.
Austin then tried to get out of the contract by arguing that the developer failed to give him a copy of the original disclosure statement before he signed the contract, as required by law.


The developer disagreed on both points, and in the winter of 2011 when the building was completed, Austin didn't pay the balance of the purchase price.
Six months later, the developer sold the unit for just over $2.05 million and sued Austin for the difference in price, minus his deposit.
In her ruling issued last week, Justice Catherine Bruce dismissed Austin's claims that he had not received the disclosure statement, noting he had signed a statement saying he had received it at the time he inked the deal.
She also found nothing substantial to support Austin's claims that he had an oral agreement with the developer permitting him to assign the pre-sale agreement without the developer's agreement.
The Court ordered Austin to pay the developer nearly $500,000 to cover the difference between the pre-sale and final sale price, minus his deposit.
Austin was also ordered to pay the maintenance fees and property taxes for the six months it took the developer to sell the condo.

Meanwhile it seems the industry is fighting hard to prevent future buyers from trying to escape their contract based on changes to the disclosure statement.

CBC reports developers, through the Urban Development Institute (UDI), are lobbying the Province to change the act because buyers are using it as a loophole.  The UDI says buyers simply want out of contracts signed before the market had fallen.  "To allow them to do so leads to uncertainty and... slows down the industry and the economy as well as impacting housing supply and prices." 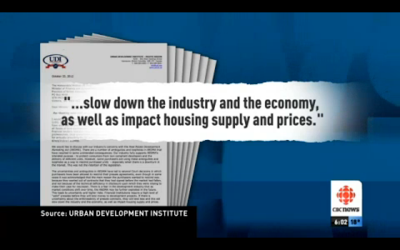 Posted by Whisperer at 7:13 AM