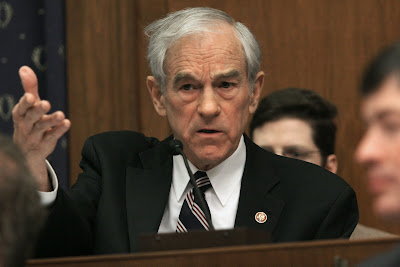 In an oped piece posted in Bloomberg, Congressman Ron Paul once again outlines the common sense argument over US debt that is so poignant.
In strict terms, the US will default if America fails to meet its debt obligations, through failure to pay either interest or principal due a bondholder.
To avoid this, there is a giant push to raise the debt ceiling.  The other way of avoiding it is to make massive spending cuts.  America is bringing in roughly $1 Trillion in tax revenue and needs to borrow an additional $1.9 Trillion to cover all expenses.  To avoid raising the debt ceiling, America would have to institute massive spending cuts.
In his OpEd piece, Ron Paul notes that there are numerous claims that a default on Aug. 2 is unprecedented and will result in calamity (never mind that this is simply an arbitrary date, easily changed, marking a congressional recess).
Paul notes that the U.S. government defaulted at least three times on its obligations during the 20th century;
Paul goes on to describe how these moves freed the US government to now spend unlimited amounts of money because they were no longer constrained by any sort of commodity backing; the only check on its spending being the market’s appetite for Treasury debt.
Paul quotes the Austrian School’s theory of the business cycle that describes how loose central bank monetary policy causes booms and busts:
Loose monetary policy drives down interest rates below the market rate, lowering the cost of borrowing; encourages malinvestment; and causes economic miscalculation as resources are diverted from the highest value use as reflected in true consumer preferences.
Loose monetary policy caused the dot-com bubble and the housing bubble, and now is causing the government debt bubble.
Paul zero's in on how, for far too long, the Federal Reserve’s monetary policy and quantitative easing have kept interest rates artificially low, enabling the government to drastically increase its spending by funding its profligacy through new debt whose service costs were lower than they otherwise would have been.
And it's that quandary which has America at it's most important crossroads since the Civil War.
By raising the debt ceiling all America does is postpone the inevitable. Increasing the debt ceiling allows the US to keep spending.  Since there is no way the money can be paid back, it means default is simply kicked down the road.
More spending will mean more money printing. A future default won’t take the form of a missed payment, but rather will come through hyperinflation.
Paul notes that default will be painful, but it is all but inevitable for a country as heavily indebted as the U.S.
The past 40 years have clearly shown that pumping money into the system to combat a recession only ensures an unsustainable economic boom and a future recession worse than the first.
Wise words.
But the path of action has already been chosen. And without titanic resolve, there won't be a deviation from that path.
==================

Email ThisBlogThis!Share to TwitterShare to FacebookShare to Pinterest
Labels: Ron Paul, US Debt, US Debt Ceiling