The United States is currently engaged in political theatre about raising the debt limit.  We say 'theatre' because that's what it is... a postering performance.  The arbitrary limit will be raised and America will do nothing to address it's structural debt problem, at least not yet.
The problem, of course, is that the debt is so large right now it can't be repaid.  $14 Trillion is such a large amount most people cannot grasp just how much money that is.
And the 'real' debt is so much larger that the mind simply can't comprehend how much money is involved.
First, let's put a few things in perspective. Recently the blogoshpere have been reposting an excellent link to a visualization of the US debt. Above is a US $100 bill (click on all images to enlarge).
Using that as our basis, let's look at different amounts of money.
Here is what $10,000 looks like: 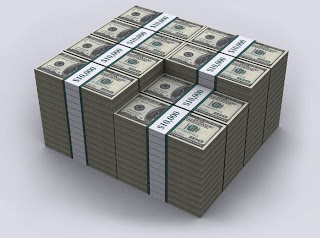 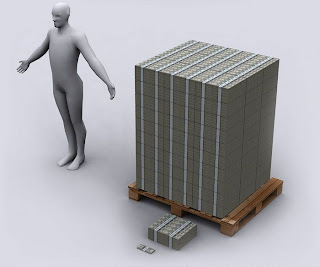 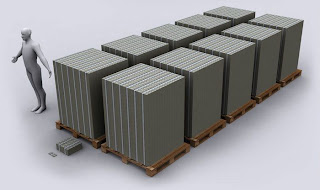 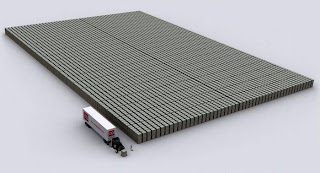 This is what $15 Trillion looks like. This is the current debt limit: 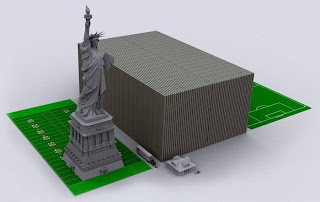 But that's not the real problem.
These numbers are incomplete.  The actual figure of the US' national debt is much higher than the official sum of $14.3 trillion.
The $14.3 trillion figure does not count off-budget obligations such as required spending for Social Security and Medicare, whose programs represent a balloon payment for the Government as more Americans retire and collect benefits.
In the case of Social Security, beginning in 2016, the US Government will be paying out more than it is collecting in taxes. Social Security Commissioner Michael Astrue says that "by 2037 the Social Security Trust Fund will be exhausted. There will be enough money only to pay about $US0.76 for each dollar of benefits."
How large are those off-budget obligations?
David Walker, the US Comptroller General from 1998 to 2008, estimates the total debt at about $60 trillion.
But Laurence Kotlikoff, an economist at Boston University and co-author of 'The Coming Generational Storm: What You Need to Know about America's Economic Future.' says that the full range of off-budget obligations totals $202 Trillion.
Regardless of who is right, keep these off-budget obligations in mind as the debt limit charade drags out over a piddling several $Billion in spending cuts. America hasn't even begun to tackle the problem.
This looming systemic debt tsunami can only be solved one way: default and destroying that debt.
It is inevitable.
Just for reference, this picture below shows you $114 Trillion.  That's not a building next to the twin towers of the World Trade Centre; that's a stack of $100 dollar bills as wide and long as a football field and significantly taller than the WTC: 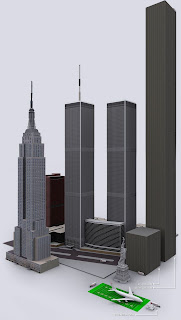 Please read disclaimer at bottom of blog.
Posted by Whisperer at 5:17 PM