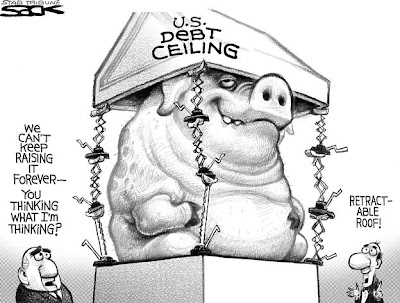 So the theatre that is the debt ceiling debate in the United States may be coming to a close as both sides seem poised to reach an agreement.
But as your faithful scribe has noted before, the debt ceiling issue isn't the problem.
And once again it is David Stockman, former federal budget director under President Reagan, making news with a succinct analysis of the issue:
Yes... you read that right.  The deficit with the United States budget is so great that after all taxes and income are counted, the United States must borrow $6 BILLION per day to function.
Speaking to CNBC last week, Stockman said:
Stockman believes that Washington will come to some type of an agreement at the last moment to raise the debt ceiling, but it will only be a short-term fix.
And that is the most important point to remember as the political theatre in Washington winds down.
==================