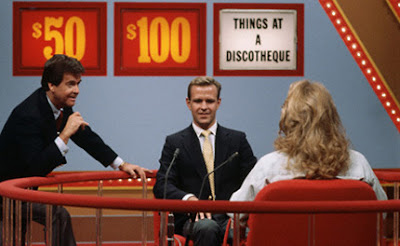 One of the themes we often talked about is how the housing bubble in our little hamlet on the Edge of the Rainforest has been enable (and inflated) by the easing of monetary policy over the past 30 years.
Back in the early 1980s interest rates were much higher and mortgage rules required you to put down 25% with a maximum amortization of 25 years.
Today interest rates have been slashed to historic lows and  we've been through a period where you could purchase with 0% down and amortize your mortgage over 40 years.
This has created a stunning rise in real estate values as cheap money inflated values. 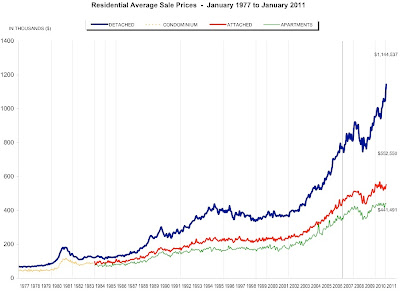 And while mortgage rules have been recently tightened to 5% down and amortization reduced to 35 and then 30 years, Vancouver remains the most bubble inflated market in North America.
Which brings us to an interesting question.  With interest rates at the lowest levels in history and amortization periods far longer than 30 years ago... is it easier to own a home now than it was back then?
In a recent press release, the Ontario Real Estate Association (OREA) suggests it isn't.
In a recent Ipsos Reid poll, 81% of Ontarians say it’s more difficult to own a home now than it was for their parents.
That’s despite the fact those 'parents' had to put down 25% to purchase a home and now you only need 5% down with many banks offering you money-back deals that mean you can put 0% down.
The mortgage broker, Canadian Mortgage Trends correctly notes that monthly payments are tougher to meet today, even with longer amortizations.
In 1984, the average minimum mortgage payment would have been roughly $628, or 18% of a married couple’s gross income, based on a:
In 2011, the average minimum mortgage payment is about $1,622 or 25% of a married couple’s gross income, based on a:
And that's nationally.  Just try and find a decent house in Vancouver (or it's immediate suburbs) for anything under $600,000.
As Canadian Mortgage Trends notes:
In theory increasing amortizations and lowering minimum downpayments was promoted in the past as helping new homeowners get into the market by making real estate 'affordable'.
In reality all it has done is enabled the pyramid real estate system to find more entrants to the lower end of the pyramid.
To make the scheme work, real estate values have to keep going up.  And that's the rub.  We are coming to the end of the line for ways to keep the pyramid going.
The OREA's press release and survey is a desperate attempt to find more ways of extending the game.

Noting that 54% of Ontario renters cited affordability as a key reason for not owning a home and 70% surveyed indicated they would be more willing to consider owning if the government offered more tax breaks and incentives to offset costs for first time buyers, the OREA plays the desperation card:
You can sense that the market is beginning to contract.
Look for all kinds of pressure to be exerted on Government to intervene 'in the name of the economy' as the pyramid breaks down.
==================

Please read disclaimer at bottom of blog.
Posted by Whisperer at 6:48 PM