On Gold and Silver's dramatic drop this morning 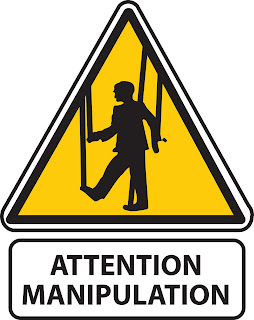 Both Gold and Silver plunged dramatically this morning.
As recently as last month we posted that "Gold is still cheap because you can bet it hasn't even begun it's ascent. Nor has Silver. But make no mistake... it will continue to be a wild roller coaster ride involving wild swings."


And the reason for those wild swings?
Over the past year this blog has tried to lay out for you just how the metals markets are heavy influenced by manipulation... particulary manipulation by central banks and their proxies.
Last week we profiled one of the US Embassy cables from China released by Wikileaks that show this manipulation is recognized worldwide, even in China.
The US Embassy cable reported that, according to China's National Foreign Exchanges Administration, "The U.S. and Europe have always suppressed the rising price of gold. They intend to weaken gold's function as an international reserve currency. They don't want to see other countries turning to gold reserves instead of the U.S. dollar or Euro."
The biggest fear in China right now is the fallout from the fierce competition that is emerging in the West as the big countries battle to devalue their own currencies against one another.
One country that has exempted itself from this practice has been Switzerland. This made the swiss currency a "flight to safety" currency on the same order as Gold.
Until this weekend, that is.
Yesterday Switzerland announced that they would buy unlimited quantities of foreign currencies to prevent the franc from rising above 1.20 Swiss francs to the euro.  In this way the Swiss National Bank (SNB) hopes to contain the meteoric rise of its currency, a rise that threatens its exports and economy.
This basically means Switzerland has moved to peg the erstwhile safe-haven franc to the euro and the last 'safe haven currency' in the West is now a carry-currency.
Gold now stands alone as the only island of stability in a world of fiat insanity.
It, therefore, should come as no surprise about what happened next.
With all Western central banks now actively managing a debasement of their currencies, what we witnessed this morning was an attempt to actively manage a debasement of gold too.
Take a look at this trading chart for Gold. Note the sudden divergence from the regular trading pattern (click on image to enlarge)... 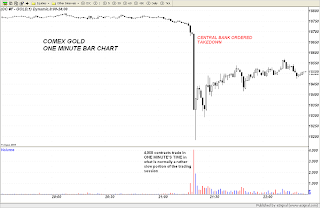 The dramatic drop is an unmistakable attempt to prevent gold from moving beyond $1900/oz.

So what happened here?
In the span of 1 minute an enormous spike of 4,000+ contracts were dumped on the market in the middle of the evening during a time period in which gold trading is not normally known for this sort of volume.
Ask yourself the logical question.  If this was a hedge fund blowing out of a long gold position, why wait for such a low liquidity environment in which to execute such a massive trade knowing full well that by so doing, one would be guaranteed the worst possible exit price for the trade?
And since the price of gold has been rising and not falling, why would any gold long be forced to unload a position? It certainly is not under any duress from price action.
The next question that must then be raised is if this were a hedge fund doing the selling to establish a fresh short position, why would they sell in such size at such an hour guaranteeing themselves to be filled with a fresh short position at the worst possible price by selling into a hole?

The logical answer is that they would not do such a thing.
As the morning has moved along we now know that the Swiss National Bank, in an attempt to mitigate the "negative" effect on francs priced in gold, sold a massive amount of gold futures at the same time.
In total 7,000 contracts (700,000 ounces, nearly 22 metric tons!) were dumped on the Globex while London and NY were closed!
What we are witnessing today is exactly the same strategy that was employed with Silver in May: maximize the downward impact and collateral damage by executing the attack at a time of minimal liquidity.
Don't be surprised to see a number of margin increases leveled against Gold traders over the next few days.
Two things are certain here.
Presumably this is why Kazakhstan's Central Bank has just announced it intends to buy all of the gold that Kazakhstan's mines produce for the next 4 years.
As we have said before, if these Central Banks are buying Gold and Silver, do you really think we are in a bubble?
==================

Please read disclaimer at bottom of blog.
Posted by Whisperer at 10:34 AM